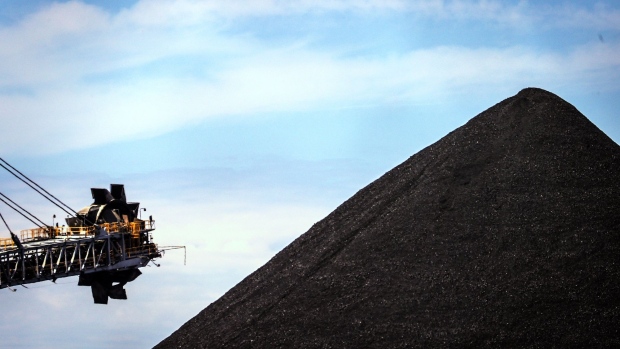 A bucket-wheel reclaimer stands next to a piles of coal at the Newcastle Coal Port, in Newcastle, New South Wales, Australia, on Monday, Oct. 12, 2020. Prime Minister Scott Morrison warned last month that if power generators don't commit to building 1,000 megawatts of gas-fired generation capacity by April to replace a coal plant set to close in 2023, the pro fossil-fuel government would do so itself. Photographer: David Gray/Bloomberg , Bloomberg

(Bloomberg) -- Allianz Global Investors plans to curtail investments in certain coal businesses by the end of the year.

The 598 billion-euro ($707 billion) investment manager said in a statement Thursday that starting in December it will no longer invest in companies that derive more than 30% of their annual revenue from thermal coal extraction, as well as those where more than 30% of their electricity production is based on coal. The new policy will apply to all existing funds for which AllianzGI acts as the management company and will be its default stance for all new funds and mandates after December.

Coal, the black rock that powered the industrial revolution and is still relied on for energy production, has become a target for a growing number of investors wishing to retool their portfolios for a lower-carbon future. AllianzGI, an investment arm of the German insurance giant Allianz SE, said the new exclusion policy shows its commitment to tackling climate change by divesting from the single largest source of carbon emissions.

“Our aspiration is to position our portfolios on a trajectory towards climate transition,” said Deborah Zurkow, AllianzGI’s global head of investments. “Our coal withdrawal strategy marks the next stage in our contribution to tackling climate challenge.”

While it’s positive that the asset manager has introduced a coal policy, the thresholds for exclusion are disappointingly low, said Lucie Pinson, director and founder of environmental nonprofit Reclaim Finance. The asset manager will still be able to invest in such companies as Glencore Plc and BHP Group that have large coal business yet which constitute less than 30% of their revenues, she said.

Data from the Global Coal Exit List, a database of companies involved in the coal industry developed by German nonprofit Urgewald, shows companies generating less than 30% of their revenues from coal are planning up to 246 gigawatts of new coal power capacity, which equates to five times the coal power installed capacity of Germany, said Pinson.