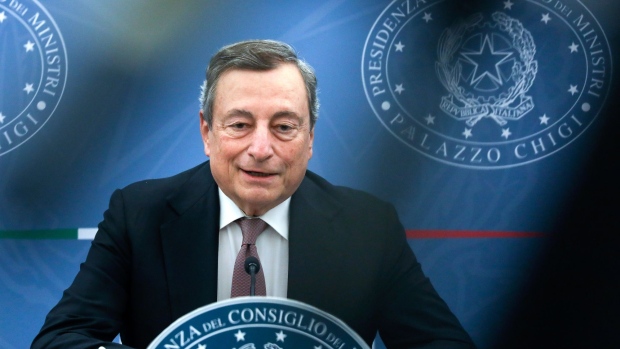 Mario Draghi, Italy's prime minister, speaks during a news conference in Rome, Italy, on Tuesday, Oct. 5, 2021. Prime Minister Mario Draghi is pushing ahead with his plan to reform Italy's outdated tax system just a day after local elections, in a warning to his coalition that he’s not interested in post-vote wrangling. , Bloomberg

(Bloomberg) -- A key ally in Mario Draghi’s coalition ramped up the pressure on the Italian prime minister, saying it would stay in government if he makes concessions on its flagship measures.

Draghi met Giuseppe Conte, leader of the Five Star Movement, in Rome Wednesday in a bid to settle long-running disputes which have undermined the government’s unity.

“We are ready to remain in the government, but we have a lot of political unease which has added up,” Conte told reporters after the meeting. “We are asking for a strong message of discontinuity.”

While an immediate exit of Five Star ministers from the cabinet has been averted, pulling the plug on the government remains a possibility discussed among party officials and lawmakers. Draghi has said such a scenario would put an end to his government, jeopardizing his ambitious reform agenda and sending shock waves across markets.

The turmoil in Rome highlights the country’s precarious political balance with an election due next year, and investors are watching. The coalition infighting risks complicating Italy’s response to Russia’s invasion of Ukraine, and impacting European efforts to sanction Moscow and support Kyiv.

Italian 10-year yield premiums over their German peers -- a major risk gauge in the region -- pared their decline by a couple of basis points to 195 basis points.

“The Italian political headlines may add to investors’ caution to add Italian risk, but I think these are the usual skirmishes, of which we will see more as we are heading into budget season and then the election,” said Christoph Rieger, head of fixed-rate strategy at Commerzbank AG.

Conte handed Draghi a document with his requests and said that the premier will take some time to assess the demands before responding.

Conte, who preceded Draghi as prime minister, has questioned Rome’s military support to Ukraine, and has called for more social measures such as a citizen’s income -- a vital measure for Five Star which the Draghi administration has curtailed.

Di Maio’s exit from Five Star left Matteo Salvini’s League as the biggest party in the coalition, and Salvini is also likely to push for concessions heading into the electoral campaign.

Conte’s stance on Ukraine is also weakening Five Star’s alliance with the center-left Democratic Party, Draghi’s staunchest supporter in the government. Democrat officials said that a Five Star exit from the government would have put their alliance at the next general election into question.