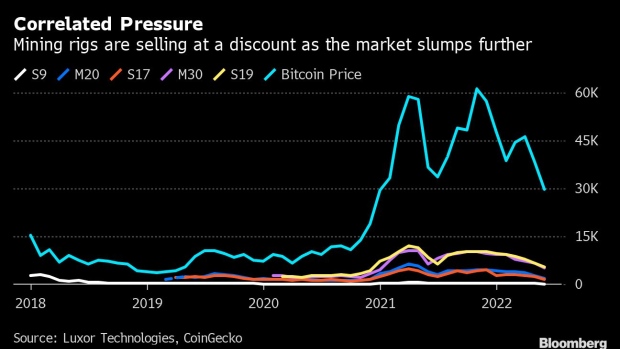 (Bloomberg) -- The prolonged slump in Bitcoin is making it more difficult for some miners to repay the up to $4 billion in loans they have backed by their equipment, posing a potential risk to major crypto lenders.

A growing number of loans are now underwater, according to analysts, as many of the mining rigs lenders accepted as collateral have now halved in value along with the price of the world’s largest digital token.

Few miners have defaulted on their loans so far, but recent sales are showing signs of distress. Core Scientific Inc. sold more than 2,000 Bitcoin in May to help cover operational costs. Meanwhile, Bitfarms Ltd. offloaded nearly half of its mined tokens earlier this month to pay down part of its $100 million loan with Galaxy Digital Holdings Ltd. It has also taken out another machine-backed loan from New York Digital Investment Group LLC.

If the market doesn’t improve, analysts warn it could be an ugly scenario. Selling Bitcoin reserves puts further pressure on prices and the cost of equipment could fall even lower if lenders -- looking to recoup their losses on defaults -- start liquidating machines they repossess. The value of Bitmain’s popular S19 mining rig is down about 47% from a high of roughly $10,000 in November, according to data from Luxor Technologies Corp.

“Bitcoin miners, broadly speaking, are feeling pain,” said Luka Jankovic, head of lending at Galaxy Digital. “A lot of operations have become net IRR negative at these levels. Machine values have plummeted and are still in price discovery mode, which is compounded by volatile energy prices and limited supply for rack space.”

Bitcoin mining -- which uses powerful computers to process records of transactions and earn rewards in the token -- was among the most lucrative businesses in the run-up of crypto’s historic bull run. Margins could be as high as 90%. But loans for upgraded machines via traditional finance could be hard to come by or included high interest rates given the market’s volatility.

To fill the void, native-crypto lenders such as Galaxy Digital, NYDIG, BlockFi Inc., Celsius Network Ltd., Foundry Networks LLC and Babel Finance began to accept rigs as collateral in addition to cash down payments. But now those lenders could be significantly undercollateralized, said Ethan Vera, co-founder of Seattle-based mining company Luxor Technologies. “They are nervous about their loan books, especially those with high collateral ratios.”

Vera estimates there’s up to $4 billion in loans backed by machines, which is on top of even more token-backed loans, first popularized in Asia with lenders like Babel.

BlockFi Chief Risk Officer Yuri Mushkin said in an email to Bloomberg that mining-backed loans are “only a portion of our larger lending portfolio” and follow the same risk and underwriting practices implemented across its institutional business.

Foundry declined to comment while NYDIG, Babel and Celsius did not respond to a request.

Many Bitcoin miners still enjoy decent profit margins. The cost of production for a large mining company is around $8,000 per token, assuming average electricity prices and fairly new mining machines, according to Jaran Mellerud, a mining analyst at Arcane Crypto.

“But the reduced income still impacts their business as some of them have loans to repay and collateral to post for their machine purchases,” Mellerud said. “These payments might be hard for them to make without selling a significant portion of their Bitcoin holdings.”

An industry shakeout could be around the corner, especially for smaller, negative cash-flow operators that bought pricey equipment months ago, thinking it would appreciate in value.

If you factor in overhead costs for infrastructure and interest rates, the total costs for some miners may already be above $20,000, which is around Bitcoin’s current price, said Wilfred Daye, chief executive officer of Securitize Capital.

“Miners thought they would be in a better capital raising environment today,” Vera said. “They bought tens of thousands of machines, signed up for hosting, put the deposits down and now they can’t fulfill” obligations, he said.

Will Foxley, director of content at Compass Mining Inc., said the cost to raise capital has surged dramatically with debt and equity market opportunities drying up for miners.

“Bitcoin walks off the cliff, then the value for the machines goes down even more because people do not really want to use it for anything else,” he said. “There are just a ton of machine orders that are still outstanding.”