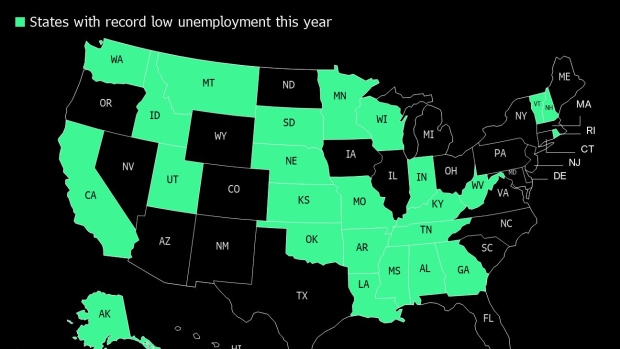 (Bloomberg) -- The unemployment rate declined in more than half of American states in July, with a record 22 states reporting jobless rates at or below 3% in another data point providing evidence against a US recession.

Minnesota had the lowest rate at 1.8% last month, followed by Nebraska, New Hampshire, and Utah at 2% each, Labor Department data showed Friday. In 28 states, the unemployment rate is below the national average of 3.5% -- the lowest in five decades -- and in 26 states, the jobless rate fell to a record low at some point this year.

The data are positive for President Joe Biden, whose approval ratings have been weak ahead of midterm elections amid the fastest inflation in four decades and an economic slowdown that some characterize as a recession.

“Americans all across the country are back at work in record numbers,” he said in a statement.

“Those are seriously non-recessionary numbers for the here and now,” he said in an interview on Bloomberg Television.

While jobs are booming across the US, not all areas and sectors are seeing growth. In Kentucky and Tennessee, the number of people working fell by 11,400 and 12,400 respectively from June.

In nine states including New York and New Jersey, construction jobs are down from a year earlier. That sector is sensitive to interest rates, which the Federal Reserve has increased by 225 basis points this year to counter the hottest inflation in four decades. The sharp uptick may have forced developers to scale back plans.

Construction jobs also decreased in Minnesota from a year earlier, but that might be simply due to the lack of employees to fill them. Data from the Bureau of Labor Statistics released this week also shows that the state has more than 200,000 total jobs open and available.

Texas, California, and Florida led the country in construction-job growth, with an aggregate gain of more than 113,000 workers.