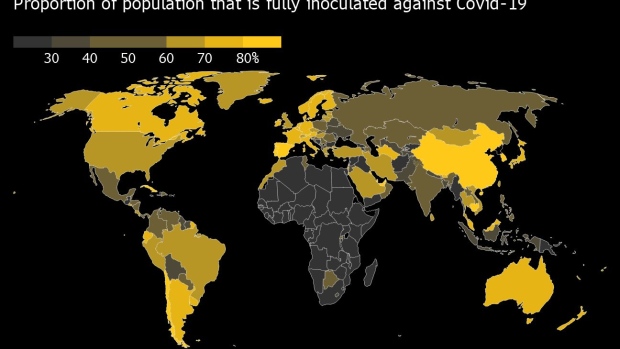 A visitor has a Covid-19 vaccine administered at the Discovery Ltd. mass Covid-19 vaccination site in Johannesburg, South Africa, on Thursday, Dec. 9, 2021. South Africa's government is weighing the risks that a stricter lockdown might pose to the economy as it considers tightening restrictions to curb surging coronavirus infections, Minister in the Presidency Mondli Gungubele said. , Bloomberg

(Bloomberg) -- Almost half the world’s nations, including the vast majority of those in Africa, trail the vaccination level that the International Monetary Fund set as a target for the end of last year in order to curb the Covid-19 pandemic.

Eighty-six out of 206 countries had less than 40% of their population immunized as of Dec. 31, according to IMF staff calculations and estimates based on Our World in Data. More than half of the nations that are behind are in Africa, and more than two dozen countries on that continent have less than 10% of people fully vaccinated.

The total shortfall in administered vaccine doses globally was 974 million.

The IMF in May proposed a spending plan to target immunizing at least 40% of the global population by the end of last year and 60% by the first half of 2022, calling for vaccine donations for developing countries. The plan was endorsed by the World Health Organization, World Bank and World Trade Organization. The fund later increased its goal for the first half of 2022 to 70%.

The IMF said that meeting the goals of its plan would save lives and deliver a potential $9 trillion economic boost by 2025. The current vaccination deficit, highlighted in the update to the IMF’s World Economic Outlook published on Tuesday, underscores the divergence in fates between rich nations and emerging and developing ones. There is also deep inequality in testing, with testing rates about 80 times higher in high-income countries than in low-income ones.

“To address many of the difficulties facing the world economy, it is vital to break the hold of the pandemic,” Gita Gopinath, the IMF’s first deputy managing director, who previously served as its chief economist for three years, wrote in a blog accompanying the report. “This will require a global effort to ensure widespread vaccination, testing, and access to therapeutics, including the newly developed anti-viral medications.”

As of now, only 4% of the population in low-income countries is vaccinated, versus 70% in high-income countries. The IMF on Tuesday urged action to close a $23.4 billion financing gap for the Access to Covid-19 Tools Accelerator, known as ACT -- the campaign led by the WHO and others. The fund also urged incentivizing technological transfers to help speed up diversification of global production of critical medical tools, especially in Africa.