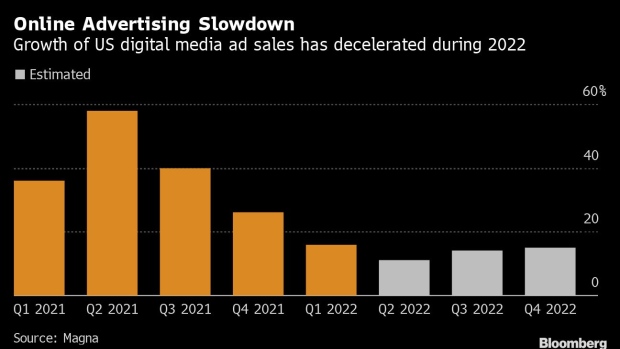 (Bloomberg) -- Alphabet Inc., Microsoft Corp. and Texas Instruments Inc. posted double-digit quarterly revenue growth on Tuesday and expressed optimism about the coming months, reassuring investors who had been fretting that the technology industry was poised for a dour second half.

Shares of all three companies rallied in late trading, spurring S&P 500 futures and giving a boost to tech peers. The earnings reports from the trio of industry giants set the tone for a week that will include results from heavy hitters like Meta Platforms Inc., Qualcomm Inc., Apple Inc., Amazon.com Inc. and Intel Corp.

An online advertising slowdown had been a particular concern of investors, who dragged down shares of Snap Inc. and Twitter Inc. following their earnings reports last week.

“I would construe this report as a sigh of relief,” Dan Morgan, a senior portfolio manager at Synovus Trust Co., said of Alphabet’s results. “You’re looking at an environment where the overall ad spend rates are definitely slowing down, yet Google still was able to deliver above and beyond.”

The three reports reflected underlying resilience, if not outright strength, in four of the industry’s main pillars: digital advertising, cloud computing, information-technology spending and chips. Still, it wasn’t all good news. The surging US dollar, which reduces the value of foreign sales, is eroding revenue -- especially at Microsoft. And Texas Instruments saw weaker demand for chips in consumer products.

Alphabet missed analysts’ estimates for its YouTube and its cloud businesses. The company’s earnings also came in light: Profit was $1.21 a share, compared with an estimate of $1.32.

The companies also pointed to growth roadblocks looming in the coming months. Advertisers have begun to pull back on spending, exercising caution in an uncertain economic environment. Alphabet Chief Financial Officer Ruth Porat used the term “ad pullback” several times on a conference call with analysts. “It’s clear Google has its work cut out for it in the back half of the year,” said analyst Evelyn Mitchell of Insider Intelligence.

Even so, investors were cheered by the overall tone of Google’s remarks. The market for search advertising is more resilient than that of ads on social media, insulating Google’s business relative to competitors like Snap and Facebook.

At Microsoft, the company signed a record number of Azure cloud contracts worth more than $100 million and $1 billion, CFO Amy Hood said in an interview. Commercial bookings, a measure of future sales to corporate customers, were “significantly” better than the company expected, rising by 25%, an indication corporate demand for Microsoft software remained strong in the quarter, Hood added.

Texas Instruments, one of the world’s biggest chipmakers, said demand for semiconductors used in industrial machinery and vehicles was strong. It also saw a rebound in China after that country began lifting Covid-related lockdowns in the country, which had shuttered factories.

South Korean chipmaker SK Hynix Inc. delivered strong results as well, helped by the flip side of a strong US dollar. The weaker Korean won -- along with resilient demand -- contributed to a 56% gain in profit last quarter. Still, the company was circumspect about the future, saying it would “carefully” review its 2023 investment plan.

Investors will get deeper insight into the underlying health of digital advertising, chips and IT spending Wednesday, when Meta and Qualcomm and ServiceNow Inc. release their latest numbers.