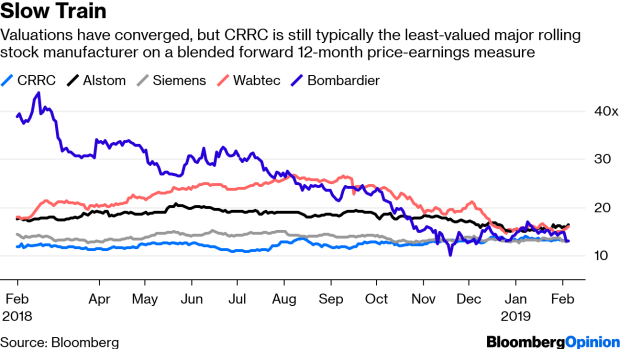 (Bloomberg Opinion) -- Once upon a time, Siemens AG and Alstom SA were falling over themselves to talk up the China story.

Alstom’s 2004 contract to supply the country with 60 passenger trains and 180 freight locomotives was celebrated with an announcement touting the 1 billion euro ($1.14 billion) contract value and the French company’s prospects for future growth there. A similar contract from Siemens for 300 kilometers-per-hour trains was announced a year later during a state visit to Germany by then Chinese President Hu Jintao.

“This contract means that China will be supplied with the most up-to-date technology for high-speed trains,” Siemens’ then-chief executive officer Klaus Kleinfeld said at the signing ceremony. “With this project, we will be able to expand the long-term strategic partnership between the German and Chinese rail industries.”

He was right about the first part.

Thanks to the technology-transfer terms written into both contracts, the two European industrial giants signed away some of their core technology to state-owned rolling stock manufacturer China CNR Corp. That’s since been merged with CSR Corp. to create CRRC Corp., now the world’s largest train-maker with revenues that dwarf what either Alstom or Siemens makes from railways.

Far from being a partner, CRRC became the bogeyman that the two companies used to spook European antitrust authorities into waving through Alstom’s takeover of Siemens’s rail unit. Their efforts failed on Wednesday, as the EU Competition Commissioner Margrethe Vestager rejected the deal. It’s hard to feel much sympathy.

In the circumstances, it might seem understandable that they should want to join forces to tackle the monster they’ve created. Having been cheated of a bigger stake in China’s domestic market by Beijing’s one-sided foreign-investment rules, the least they could be expected to do is fight back now that CRRC is competing head-to-head with them. It’s lamentable, Alstom’s Chief Executive Officer Henri Poupart-Lafarge told Le Figaro this week, that “ideological prejudices” have blocked the creation of a European champion.

But there’s a better way to look at the history behind this; one that casts things in a very different light.

Instead of being tricked, Alstom, Siemens, and their rivals Bombardier Inc. and Kawasaki Heavy Industries Ltd. agreed to hand over some of their most precious intellectual property with their eyes wide open. The vast majority of the trains sold under the 2004 and 2005 contracts were built in China, with explicit technology transfer terms written into the agreements to allow that. Alstom, for what it’s worth, has long criticized Siemens and Kawasaki for including their most innovative high-speed rail know-how in those deals.

Other industrial companies were more circumspect about China’s opening up. As we’ve written before, the automotive sector was governed by identical regulations but has managed to thrive by keeping its most precious intellectual property under lock and key.

Despite becoming the biggest market for Volkswagen AG and General Motors Co., China still has a smaller value of car exports than Thailand or Slovakia. As my colleague Anjani Trivedi has written, the trick has been to give Chinese joint-ventures technology that’s about to become obsolete, rather than the “most up-to-date” innovations that Siemens boasted of licensing to its partners.

A separate question is how to deal with the current situation, where (if you believe Alstom and Siemens) CRRC is on the rampage.

As my colleague Chris Bryant wrote last year, an inconvenient fact for those who pushed for a defensive creation of a “European champion” is that the French and German businesses have been doing rather well. Alstom’s orders more than doubled in the six months through last September compared to the same period a year earlier.

Siemens’ rail business, likewise, is one of its strongest units, with double-digit margins that have have hit internal targets for 21 consecutive quarters. The unit just took in its best quarterly order book in more than a decade.

For all that the merger’s backers liked to tout a chart showing CRRC’s massive rail revenues dwarfing even their combined businesses, that’s largely an artifact of China’s massive domestic rail spending. In the international contracting market, it’s much less threatening than Bombardier, Hitachi Ltd., and even Wabtec Corp., fresh from digesting General Electric Co.’s rail business.

As the EU’s initial assessment of the deal noted last year, a merger wouldn’t improve the state of the market at all. Instead, it would have created a company more than three times as big as its nearest competitor in both rolling stock and signalling.

For all the local European politics favoring a deal, Vestager is right to block it. The world’s rail users have much more to fear from a dominant Alstom-Siemens than the big bad Chinese wolf.