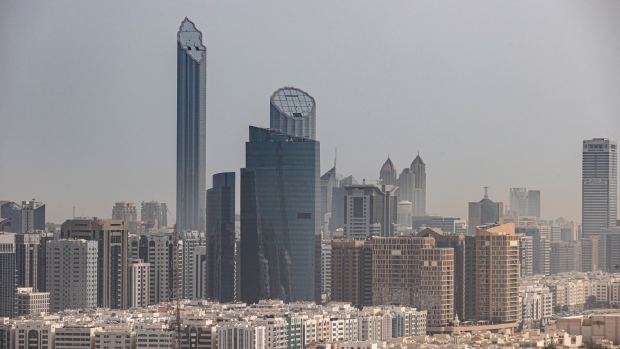 Residential and commercial skyscrapers in Abu Dhabi, United Arab Emirates, on Sunday, April 10, 2022. Abu Dhabi regulators approved a framework for special purpose acquisition companies, looking to capture some of the blank-check boom that has gripped global markets for the past two years. Photographer: Christopher Pike/Bloomberg , Bloomberg

Alvarez & Marsal Inc. plans to boost its staff in the Middle East by about 70% after opening offices in Riyadh and Abu Dhabi, as regional competition for financial advisory and restructuring builds.

The turnaround firm aims to have more than 200 employees in the region in 2023 after doubling headcount to 116 in the past year, it said in a statement on Monday. As part the expansion, James Dervin has moved to the Saudi Arabian capital from London to co-lead the region with Dubai-based Paul Gilbert. The firm also hired Faisal Shaikh and Hazim Almegren as managing directors in the corporate finance and financial services group.

A&M is among a handful of international restructuring firms who’ve ramped up hiring in the oil-rich Gulf, which has seen a number of restructurings in recent years. The New York-based company made its mark in the Middle East after being appointed as the administrator of scandal-hit NMC Health Plc in 2020. It has also worked on other high-profile cases, including Gulf Pharmaceutical Industries PSC and Finablr Plc.

“Following some high-profile corporate failures, the region’s leadership are taking an increasingly tough stance on audit conflicts -- particularly in the Kingdom,” Gilbert said in the statement.

A&M hired half a dozen turnaround specialists from Deloitte, including a partner, Waqas Ahmed, two directors, Tom Howitt and Ali Taher, as well as three other employees from the accounting firm, Bloomberg reported in June.

Deloitte has also been expanding its restructuring presence in the Middle East, where it employs more than 70 people. The firm is advising creditors of Dubai developer Meydan, which is working on a $2.6 billion debt restructuring plan. Teneo, meanwhile, hired two executives from AlixPartners LLC in Dubai this year, marking its entry into the fast-growing market.