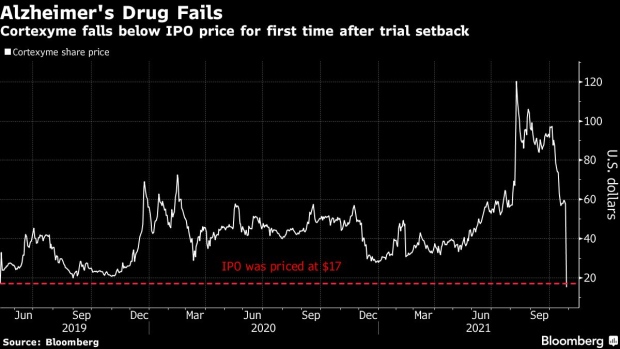 (Bloomberg) -- Cortexyme Inc. sank on Wednesday, falling below its 2019 initial offering price of $17 for the first time, after its experimental Alzheimer’s disease treatment failed to help patients better than a placebo.

The stock plunged 76% Wednesday, falling to $14.13, after an experimental treatment targeting the bacteria that causes gingivitis didn’t show a substantial difference in people’s cognitive abilities. The drug atuzaginstat also failed to show a benefit in patients’ ability to handle tasks of daily living.

The drug also appeared to increase certain liver enzymes to more than three times normal levels in some patients, though they remained asymptomatic. The 643-person study was put on a partial hold by U.S. regulators in February over liver reactions.

Some smaller biotechs targeting Alzheimer’s, including Cortexyme, experienced triple-digit rallies this year after Biogen Inc.’s Aduhelm in June became the first new treatment approved for the disease in years. Peers like Cassava Sciences Inc. and Athira Pharma Inc. have seen some of the jaw-dropping rallies reeled back in after further scrutiny.

Wall Street analysts had price targets as high as $221 for the stock before the trial results though some like Citigroup analyst Neena Bitritto-Garg had taken a bearish view. She said in September that the study would likely fail. She slashed her 12-month price target late Tuesday to a Wall Street low of $5, what she says is Cortexyme’s cash value.

The company still plans to pursue drug development based on trends seen in some patients with detectable levels of periodontal disease, according to a statement. Bitritto-Garg remains a bear, saying any signals in such a subgroup analysis are unconvincing while the liver toxicity issues would be a “non-starter for regulators.”