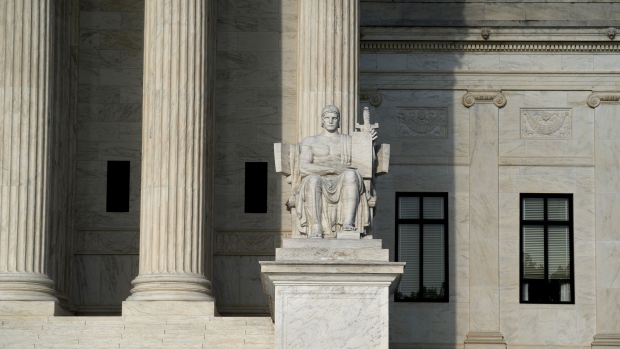 The Authority of Law statue outside the U.S. Supreme Court in Washington, D.C., U.S., on Sunday, June 20, 2021. The White House on Friday reiterated opposition to indexing the gasoline tax to inflation to help pay for an infrastructure plan, raising new questions about the viability of a bipartisan compromise emerging in the Senate. Photographer: Stefani Reynolds/Bloomberg , Bloomberg

(Bloomberg) -- The Supreme Court declined to consider a bid by Amarin Corp. to revive six patents on the heart medicine Vascepa, the drugmaker’s only product, in a decision that lets generic versions of the drug remain on the market.

The justices turned away a petition in which Amarin claimed a federal judge in Nevada erred in her analysis that invalidated the patents. The U.S. Appeals Court for the Federal Circuit, the nation’s top patent court, summarily affirmed the judge last year without issuing a formal opinion just one day after hearing arguments.

Vascepa, a synthetic version of the omega-3 fatty acid derived from fish oil, accounted for almost all of Amarin’s $614.1 million in revenue last year. The patents cover the use of the drug to lower triglyceride levels, particularly for patients with a genetic condition that leads to high levels of the fats.

Generic-drug makers Dr. Reddy’s Laboratories Ltd. and Hikma Pharmaceuticals successfully argued that a version of Vascepa’s active ingredient has been known since the 1990s, so the treatment method isn’t all that unique.

Dublin-based Amarin said Vascepa is a “groundbreaking invention” against high triglycerides and eliminated some of the negative risks associated with other medicines, such as increasing levels of so-called bad cholesterol, a wasting of muscle, and gastrointestinal problems.

In its petition, Amarin argued that the trial court conducted its analysis incorrectly. The judge made an initial finding that Hikma had presented enough evidence of invalidity. Only after that finding did she consider Amarin’s arguments that real-world evidence such as the commercial success of Vascepa showed the ideas were new. The development of the drug was “an insight that defied common wisdom at the time” and was initially met with skepticism from other experts, Amarin said.

The judge’s analysis improperly puts the burden on patent owners to defend their patents, Amarin argued. “The result is over-invalidation of patents through hindsight bias and the suppression of innovation,” the company said.

Hikma and Dr. Reddy’s said the trial court’s decision was a “fact-intensive ruling” that relied on existing law and “breaks no new ground.” They also noted that the three-judge Federal Circuit panel didn’t write an opinion and the entire court declined to reconsider that.

“The Federal Circuit’s decision is a one-line, nonprecedential order that does not raise any issue at all, let alone the petition’s question presented,” the generic-drug makers said.

After Hikma entered the market in November, Amarin filed another lawsuit, claiming the generic-drug maker is promoting the medicine for reducing the risk of cardiovascular diseases in violation of patents that weren’t part of the Nevada case.

Amarin received a separate regulatory approval to sell Vascepa for heart disease and has launched an aggressive advertising campaign to promote the drug for that use featuring the Go-Gos singing their 1980s New Wave classic “We Got the Beat.”

Hikma and Health Net, an insurance provider owned by Centene Corp., are looking to dismiss the case, saying Hikma is using a “skinny label” that only covers the older approved use of Vascepa to lower triglyceride levels.

Amarin had the backing of LiquidPower Specialty Products Inc., a developer of ways to improve pipeline flow that said the Federal Circuit’s rules for analyzing whether patents are obvious “has significantly increased the likelihood that LSPI’s patents will be improperly invalidated based on hindsight bias,” in a dispute it has with Baker Hughes Co. that’s being considered by the Federal Circuit.

US Inventor Inc., a group of independent inventors, and Aimed Alliance Inc., a health-policy organization that collaborates with Amarin, also urged the Supreme Court to take the case.