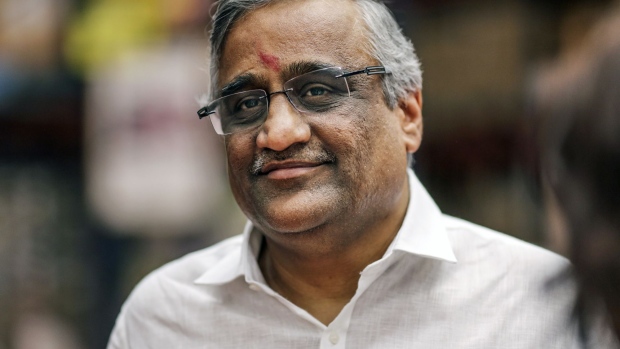 An employee operates a forklift at a warehouse operated by Future Supply Chain Solutions Ltd. near the Multi-modal Cargo International Hub Airport at Nagpur (MIHAN) in Nagpur, India, on Saturday, April 29, 2017. India is on the cusp of a sweeping tax overhaul that could turn Nagpur, at the crossroads of busy road and rail corridors that bisect India east to west and north to south, into one of the nation's biggest logistics hubs. Photographer: Dhiraj Singh/Bloomberg , Bloomberg

(Bloomberg) -- Amazon.com Inc., which is trying to block India’s richest man from taking over a struggling retail chain, fired a fresh salvo by alleging that money from the local firm was possibly diverted to other companies.

Future Retail Ltd. transfered 70 billion rupees ($939 million) in the year ended March 2020 as a capital advance to a company controlled by its founder Kishore Biyani and as payment for goods and services purchased from the related firm, Amazon said in a letter seen by Bloomberg News. Future Retail also created unusual rental security deposits and made advances to suppliers worth a total 43 billion rupees the same year, even as business slumped and it was shutting stores, Amazon said.

“Significant amounts may have been diverted from Future Retail,” Amazon said. By unwinding at least part of these transactions, Future Retail can “immediately partially repay outstanding debt owed to banks and creditors to ensure business continuity and survival,” it added.

The transactions were part of the public disclosures made by the company as part of standard governance practices, Future Retail’s representative said by email, adding that “there is nothing new that is being brought to the notice, except for false speculations being created out of selective excerpts.” A representative for Amazon India declined to comment.

The U.S. giant marked a copy of its letter to the Indian finance minister, central bank governor, capital markets regulator and other authorities, seeking an investigation.

A probe would risk delaying the planned takeover of Future Retail by Mukesh Ambani’s Reliance Industries Ltd., making it harder for the tycoon to increase his footprint. Ambani and Amazon are locked in a battle for dominance of the world’s biggest market that’s open to foreign competition, with the tussle playing out in courts in India and abroad, as well as across the country’s regulators.

The letter, dated Nov. 24, comes as India’s antitrust authority is hearing a petition from Future Retail to revoke regulatory approval of a 2019 deal between one of its group companies and an Amazon unit, saying the American retailer lied to the regulator. Amazon says Future Retail‘s plan to sell its stores to Reliance -- Amazon’s rival -- violates the 2019 partnership contract, while the indebted Indian group says it would collapse if the transaction fails.