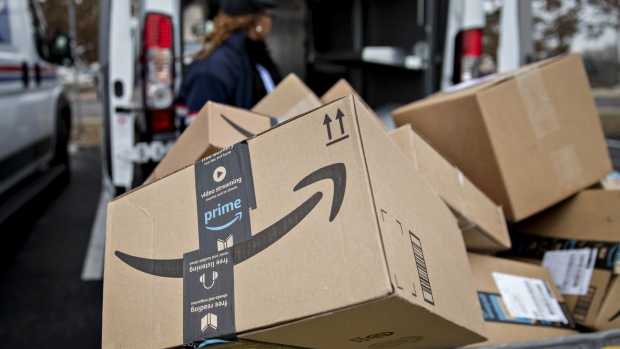 An Amazon.com Inc. package sits in a bin before being placed on a delivery vehicle at the United States Postal Service (USPS) Joseph Curseen Jr. and Thomas Morris Jr. processing and distribution center in Washington, D.C., U.S., on Tuesday, Dec. 12, 2017. , Bloomberg

Amazon.com Inc. (AMZN.O) surpassed Microsoft Corp. (MSFT.O) to become the world’s largest public company on Monday, in the latest example of the list of Wall Street’s biggest names being reordered.

Shares of the e-commerce company rose 3.4 per cent, a rally that gave it a market capitalization of US$797 billion, according to Bloomberg data. While this is down from Amazon’s record market cap, which topped US$1 trillion in September, it was enough to push it past Microsoft at US$789 billion. Shares of Microsoft, which claimed the title of the world’s most valuable stock in November, rose 0.1 per cent on Monday.

Such megacap technology and Internet stocks have been jockeying for the top spot for weeks, and Amazon briefly claimed the crown in early December.

Both companies are now notably larger than Apple Inc., which had held the position for years. The iPhone maker now has a market cap of about $702 billion, down from a record US$1.1 trillion in early October. The company has been pressured by weaker-than-expected iPhone demand in China. Last week, it cut its sales outlook, sending the stock to its lowest level since April 2017.

Apple (AAPL.O) currently stands as the fourth-largest U.S. stock. In third place is Alphabet Inc. (GOOGL,O), the parent company of Google, which has a market cap of US$745 billion.