The shares fell as much as 10 per cent on Friday, their biggest intraday drop since January 2016. Analysts, meanwhile, pointed to improving profitability and strong margins in the Amazon Web Services business as well as the company’s track record of giving conservative guidance. Standing out as relatively bearish, KeyBanc noted challenges in retail, including slowing growth and intensifying competition, as well as looming cost pressures after the company’s decision to raise its minimum wage in the U.S. to US$15. 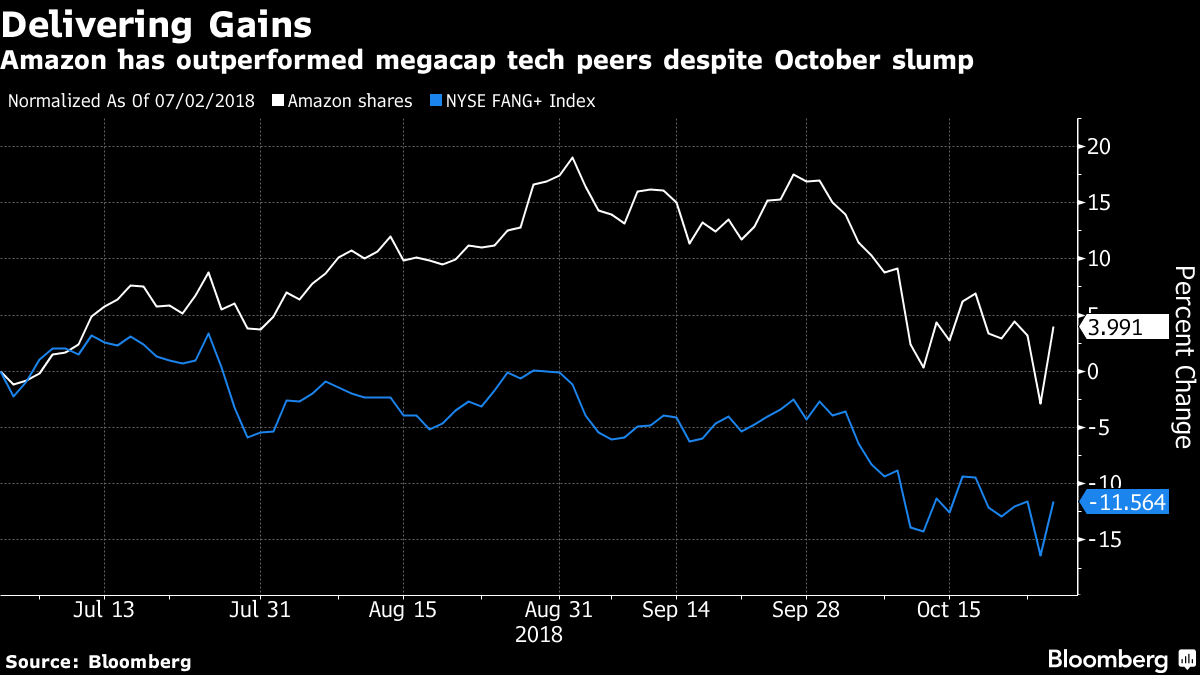 “At first glance, no change to our overall constructive view, although strong margins were offset to some degree by softness in International segment/paid units.”

Sebastian has an outperform rating and price target of US$2,100.

“Similar to 2Q 2018, we were impressed by Amazon’s healthy and broad-based 3Q 2018 operating margin expansion, which overshadowed the top-line miss.”

“We believe operating margin dollars are becoming a much more important metric for Amazon than topline growth -- and we continue to have a very bullish outlook on future profitability given the growing high-margin AWS and advertising revenue streams and the company’s increasing fixed cost leverage.”

“Management is confident about Amazon’s operational preparedness, but noted 4Q results are difficult to forecast given the compressed holiday selling season. In addition, 4Q 2018 will be the first in which Amazon will anniversary a full quarter of Whole Foods Markets net sales.”

Chukumba has a buy rating and US$2,200 price target. He recommended buying shares on weakness Friday.

Operating efficiencies across fixed costs in infrastructure and workforce are encouraging, Thill writes in a note titled “Every Rockstar Needs a Break.”

“Our checks continue to point to AWS as the gold standard for public cloud and mgmt highlighted on the call recent momentum with enterprise customers.”

“The dominance of higher-margin AWS continues to afford Amazon the luxury of investing significantly back into the core retail business, creating a virtuous cycle for both Amazon and its investors.”

Amazon posted a solid third quarter, “but for the time being, the core retail business is entering a phase of slower growth.”

While advertising and AWS drove margin expansion, cost pressures in labor and fuel and the likelihood of stepped-up hiring will act as a medium-term retail cost headwind.

“The competitive environment continues to intensify as traditional retailers are increasingly competitive.”

“We continue to believe AMZN represents the best risk/reward in Internet given the relatively early stage shift of workloads to the cloud, the transition of traditional retail online, and share gains in its advertising business, the long-term benefits of each we believe the market is underestimating for Amazon.”

Results are “generally positive” with record-high margins and consistent revenue, even as the guidance missed expectations.

“We think there may be some conservatism in margin guide given historical seasonality.”

“While some investors may be disappointed with the deceleration in revenue growth, we are encouraged by the potential for ongoing margin expansion and bottom-line upside.”

Pachter said “the mix of first and third party sales drove the shortfall” in revenue in the third quarter and Amazon’s outlook for the fourth quarter. He sees Amazon as “a victim of its own indifference” as to whether it generates product sales from first-party inventory or third-party sales. The latter revenues are booked at a much lower level since Amazon only recognizes fees it gets from third parties.

“This mix issue is likely to continue for the foreseeable future.”

Pachter has an outperform rating and $2,100 price target.