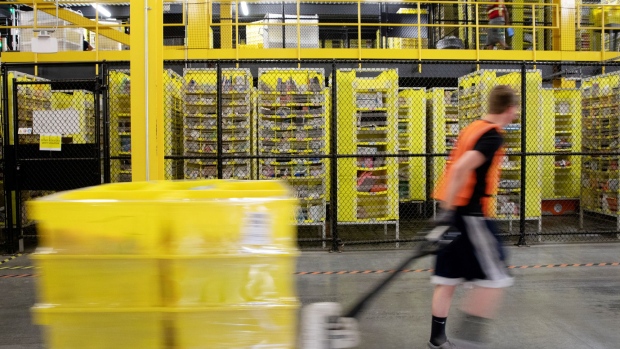 Amazon.com Inc. has played an important role in bringing groceries and other supplies to people’s doorsteps during the global pandemic. But it’s not just battling COVID-19 and the myriad logistical complexities the virus has introduced. As last week’s developments made clear, Amazon also appears to see itself as fighting a war on its other flank—against organized labor.

While other retailers closed up shop and laid off employees at the start of the crisis, Amazon said it was opening 100,000 new positions and continuing to operate its network of hundreds of warehouses and delivery centers. The company said it put in place enhanced safety measures, promoting social distancing and suspending security checks that can create lines of people outside facilities. But workers said the company should be doing more—like furnishing them with personal protective medical gear—and organized protests in Chicago, Detroit, Sacramento and Staten Island. The demonstrations were small but widely covered in the news.

The company then stumbled into a series of self-inflicted injuries. Last week, Amazon fired a five-year veteran named Christian Smalls, one of the organizers of the Staten Island protest, alleging that he had violated a quarantine after being exposed to the coronavirus at work. Smalls, who announced that he had lost his job live on our Bloomberg Technology TV program, said that conditions in the facility were “horrific,” that cleaning supplies were “scarce” and that his firing was retaliation for speaking out.

Then things got really strange. On Thursday evening, Vice News published what it called “notes from an internal meeting of Amazon leadership,” written by the company’s top lawyer, David Zapolsky. The note referred to Smalls, who is African American, as “not smart, or articulate, and to the extent the press wants to focus on us versus him, we will be in a much stronger PR position than simply explaining for the umpteenth time how we’re trying to protect workers.”

Zapolsky suggested Amazon should deliberately try to draw attention to Smalls: “Make him the most interesting part of the story, and if possible make him the face of the entire union/organizing movement.” He wrote there was “general agreement” on this point among the other attendees of the meeting, a group that included Clark and the chief executive officer, Jeff Bezos.

In a statement, Zapolsky conceded the notes were genuine and said he was frustrated over Smalls’s alleged safety infractions: “I let my emotions draft my words and get the better of me.”

Leaving aside the rarity of an Amazon executive’s internal memo leaking to a reporter, the story showed a leadership team seemingly preoccupied with the optics of minor protests and the possibility of union activity in its warehouses. In the past, Amazon has said it doesn’t want intermediaries in its relationship with employees. As a company that hires a huge number of temporary workers for the holiday season—and then dismisses many of those people in January—it probably can’t abide labor unions bargaining for enhanced job protection.

But Amazon has defeated many union incursions over the years in Delaware, Nashville, Staten Island and elsewhere. (It has also worked peaceably with steel and construction trade organizations that build its warehouses and offices.) It doesn’t have much to fear from a modern labor movement that is fractured, absorbed with old tactics and largely geographically confined to the northeastern U.S.

But it does have plenty to learn from employees who are raising legitimate concerns at a critical time—about the absence of cleaning supplies in vans, crowded job fairs and a virus that appears to be spreading in dozens of warehouses. “There are thousands of scared workers waiting for a real plan from Amazon so that its facilities do not become epicenters of the crisis. More and more positive cases are turning up every day,” Smalls said in a statement after he lost his job. “While they may have fired me, they can’t stop all of us from fighting for the protections we need.”

If you read one thing

Some WeWork staff planned their lives around a stock deal that just collapsed. Current and former employees were counting on a planned payout from SoftBank to fund new businesses, cover mortgages and pay off loans. Now they’re reassessing things.

Apple is designing face shields for medical workers, Tim Cook said Sunday. The shields are fully adjustable and assemble in under two minutes, he said. Meanwhile, an Apple supplier, Flex, is starting to assemble thousands of ventilators.

Carolina Brochado resigned from SoftBank’s Vision Fund after she was promoted to partner just last month. The technology fund has seen an exodus of partners recently.

European countries are pushing the EU’s privacy rules in their fights against the coronavirus. They’re tapping data from telecoms and tech companies, including Peter Thiel’s Palantir, in ways that could compromise people’s privacy.

Officials in the U.K. are looking to meet with social media companies over concerns about conspiracy theories spreading on their platforms. A spate of fires targeting mobile networks is being blamed on spurious online content linking 5G to the coronavirus, according to the Guardian.

New York City and other school districts are banning the use of Zoom. The video conferencing tool is under scrutiny for its security practices, the Washington Post reported. Now Zoom’s CEO is on a redemption tour.