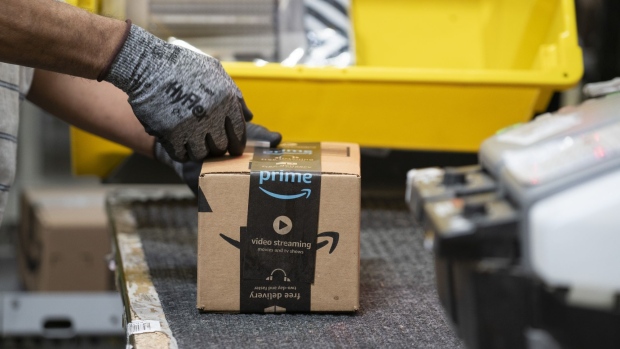 An employees places a label on a box at the Amazon.com Inc. fulfillment center in Baltimore, Maryland, U.S., on Tuesday, April 30, 2019. Amazon.com will spend $800 million in the current quarter to reduce delivery times for top customers to one day from two, trying to revive its main e-commerce franchise and ward off greater competition. Photographer: Melissa Lyttle/Bloomberg , Bloomberg

(Bloomberg) -- Covid-19 cases at an Amazon.com Inc. warehouse in Minnesota last month exceeded by at least four times the infection rate of surrounding communities, according to an internal memo reviewed by Bloomberg.

In recent weeks, Amazon executives and spokespeople have said that U.S. warehouses have fared no worse, and sometimes better, than adjacent communities. “We see Covid cases popping up at roughly a rate generally just under what the actual community infection rates are,” Dave Clark, Amazon’s senior vice president of worldwide operations, said in an interview with “60 Minutes” that was broadcast on May 10.

The company has declined to make public how many workers have contracted the coronavirus, arguing that such tallies are meaningless without context. But the memo, based on internal data and circulated among Amazon’s health and safety team, details a sophisticated tracking regime that occurs out of public view.

It’s unclear if other Amazon warehouses have exceeded community infection rates, but as of mid-May, Amazon was aware of 45 Covid-19 cases at its MSP1 facility in Shakopee, Minnesota, enough for an infection rate of 1.7%, according to the memo. That was higher than the rural county that surrounds the warehouse, and roughly four times higher than any county in the nearby Minneapolis-St. Paul metropolitan area. At the time, Hennepin County, which contains Minneapolis, was reporting a rate of 0.4%.

The memo doesn’t specify whether Amazon managers believed employees contracted the coronavirus on the job. The authors said the rise in the case count corresponded with the increased availability of Covid-19 testing in Minnesota and noted that the warehouse was “trending towards flattening the curve with a downward tick in cases.”

“Nothing is more important than the safety of our teams,” Amazon spokeswoman Kelly Cheeseman said in an emailed statement that calls the analysis cited in the memo “one of many tools that help us evaluate the full picture in our buildings related to Covid-19.” The company also conducts audits of social distancing at its sites and has an epidemiologist available to review infection data and safety measures.

“We utilize a variety of data to closely monitor the safety of our buildings, and there is strong evidence that our employees are not proliferating the virus at work. What we see generally is that the overall rate of infection and increase or decrease of total cases is highly correlated to the overall community rate of infection,” she said. Thousands of people have worked at the Shakopee site since the pandemic began, and “we believe strongly people are not spreading the virus at work given the robust safety measures we’ve put into place.”

Like many companies that kept their doors open during the pandemic, Amazon was caught off guard by the severity of the crisis. With many fearful warehouse workers staying home, the company imposed new safety procedures, including temperature checks and social distancing requirements. Still, while many employees applaud the measures, they fault Amazon for not being more open about how many of their colleagues have contracted Covid-19. That has prompted workers to keep their own tally, which has reached at least 1,500 people out of a U.S. workforce of roughly 500,000, excluding workers at Whole Foods Market stores.

The memo makes clear that Amazon has been collecting granular data on the Covid-19 outbreaks within its ranks.

In Shakopee, the company compiled information on where sick employees live, whether they’re apartment-dwellers or live in a freestanding house, what shifts they typically work and what tasks they perform inside the 860,000-square-foot warehouse. Amazon also calculates things like the density of employees in break rooms, and seeks to estimate which day sick workers were exposed.

The memo, which appears to reflect data as recently as May 18, cites an infection rate of 1.7%, based on a workforce of 2,631 people. Scott County, which contains Shakopee, at the time had a rate of 0.1%. Nearby counties, where most of the workers who caught Covid-19 live and commute to the facility by car, had rates between 0.2% in suburban Dakota County, to 0.4% in Hennepin County. Ramsey County, whose seat is St. Paul, the state capital, was at 0.3%.

That infection count was higher than estimates compiled at the time by employees seeking to track how many of their coworkers were ill. Employees say such undercounts occur because internal messages alerting workers to new cases don’t say how many have been identified. Based on those communications, employees estimated between 20 and 30 cases at Skakopee as of last month.

Debbie Berkowitz, director of the worker safety and health program at the National Employment Law Project, said that in the absence of tougher federal rules dictating how companies should deal with Covid-19 outbreaks, the responsibility for keeping employees informed about the safety of their workplace falls to businesses.

“What I hear from workers is they just don’t know how many cases are in their facility,” said Berkowitz, a former Occupational Health and Safety Administration official. “They need to be able to make personal decisions based on that, but if that information is not forthcoming, workers and the community don’t have the information they need to keep themselves safe.”

The memo acknowledges workers’ appetite for more transparency, saying that two-thirds of safety-related comments on white boards set up inside the facility called for more information about infections. Amazon addressed the comments with notices posted to the same boards and verbal communications with workers, the authors wrote. At other warehouses, such communications have primarily consisted of reassurances about the adequacy of Amazon's cleaning protocols.

The severity of the outbreak at the Shakopee warehouse came to light last week after the Minnesota Department of Health said that its own contact tracing efforts had identified a large cluster of Covid-19 cases there. It’s unclear how the infection rate in Shakopee currently compares with the surrounding community. New infections in Minnesota reached a peak in mid-May, and the average number of daily confirmed cases has declined by about half since.

On a call last week organized by Athena, a coalition of groups critical of Amazon, workers at the Shakopee warehouse described an environment of fear. They said managers generally didn’t seem responsive to their safety concerns and didn’t share with them the severity of the outbreak in their ranks.

“I’m very disappointed to hear outside the building . . . how many confirmed cases we have,” said Hibaq Mohamed, who works at the facility and has been involved in worker activism and organizing there. “It is heartbreaking and frustrating.”

Joni Scheftel, Minnesota’s state public health veterinarian before the pandemic forced her to add oversight of large employers, said state data suggest cases peaked at the Shakopee facility between April 24 and May 30. The rate of new cases there appears to have declined in June, she said, and the rate of spread is likely lower than the surrounding metro area now.

“There may have been spread [inside the warehouse] during the time when they had more cases,” Scheftel said. “But they made a lot of changes since that time.”

Scheftel, who has toured the Shakopee warehouse and joined calls with Amazon managers, said she was impressed by the company’s social-distancing measures, and didn’t see any obvious areas inside the building where workers might be passing the disease among themselves. Amazon’s outbreak is the 13th largest in Minnesota by case count, she said, trailing mainly meatpacking plants. Case count per employee is in the middle of the pack of the 250 Minnesota employers with clusters of cases, state data show. Scheftel said the state hadn’t asked Amazon for its own coronavirus data or documents about its cases or internal protocols.

The memo, “Social Distancing Building Deep Dives — MSP1,” suggests that Amazon’s safety measures aren’t enough to eliminate the risk of outbreaks entirely. Employee compliance with social distancing regulations at MSP1 regularly ranked among the best in the company’s logistics network, the authors wrote. Just one employee with a fever was caught in a temperature screening  between the implementation of the safety measures on April 2  and May 18.