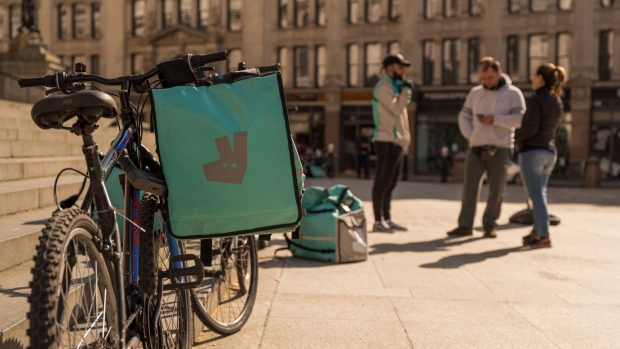 With food delivery services more important than ever, feeding Britons banned from dining out, the U.K.’s tough-talking merger watchdog is walking a tightrope.

But now the London-based regulator must decide how hard of a line to take against the companies, whose employees have been designated as critical workers by the government and act as a potential lifeline to vulnerable people.

“The government is holding discussions with logistics firms about what they can do during the crisis,” said Dom Hallas, a spokesman for the Coalition for the Digital Economy, a group representing U.K. startups. “It’d be responsible for the CMA to be asking whether the probe threatens all of that,” he said, referring to the Deliveroo case.

The regulator has been seeking concessions from Amazon to get approval for the Deliveroo investment. The British company has seen its restaurant offering surge, saying the rate of eateries signing up to its service jumped 86% in the last two weeks, compared to the prior fortnight. Establishments that boast Michelin stars as well as local takeaways have joined, “the majority of which did not perform delivery services until now,” the company said on March 23.

Meanwhile, shares in Just Eat Takeaway, the new name of Takeaway, climbed as much as 11% after U.K. prime minister Boris Johnson approved a ban on all unnecessary movement for at least three weeks and urged citizens to use food delivery services.

Deliveroo said it was “confident that we will persuade the CMA of the facts that this minority investment will add to competition.” Amazon didn’t immediately respond to a request for comment while Takeaway declined to comment.

Ahead of the coronavirus crisis, the U.K. merger regulator toughened its stance on technology mergers, acknowledging its past approach was too light.

The CMA moved to an in-depth review of the Amazon transaction after saying it had seen internal documents that the world’s biggest online retailer had considered entering the online food delivery market without the Deliveroo deal. That prospect meant that the minority investment would hurt competition by removing a potential rival in an already concentrated market shared with Uber Technologies Inc.’s Uber Eats.

Last week, the CMA also started the clock on a review of Takeaway’s proposed $8 billion acquisition of Just Eat and it’s already interviewed Amazon’s executives about their plans in online delivery.

While the authority has set up a taskforce to monitor consumer markets as the coronavirus spreads and said it could be flexible when it comes to existing deadlines, the regulator isn’t prepared to change the way it approaches mergers.

When an in-depth CMA probe is already underway there are few ways to stop it. It would stretch the limits of existing legislation for the government -- which has already designated delivery drivers as key workers -- to step in, said Sarah Long, a competition lawyer at Euclid Law.

“If the government felt it was necessary to intervene in the merger investigations on the basis that food delivery is rapidly becoming essential to our daily lives, then I’m sure it would find a way – but I’m just not sure it will be a priority at the moment,” Long said.

One option available to the regulator is to extend the Deliveroo deadline, which is currently set for June, Long said.

Amazon initially announced plans to make its investment in Deliveroo in May last year.

The CMA, which has already asked the companies to offer remedies to address competition concerns, wants Amazon to relinquish a board seat or lower the size of its stake in Deliveroo.

The Amazon investment will help “restaurants to grow their businesses, creating more work for riders, and increasing choice for customers,” Deliveroo said in a statement.