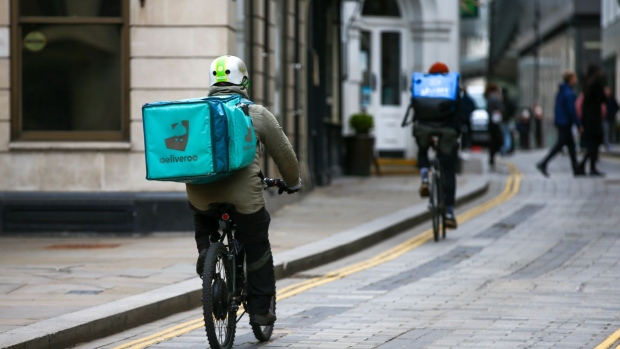 A Food delivery courier for Deliveroo Holdings Plc rides near the company's headquarters during a protest over pay and conditions in London, U.K., on Wednesday, April 7, 2021. A group of roughly 400 Deliveroo riders are expected to stage protests in five towns and cities across England on Wednesday, the Guardian reports, citing the Independent Workers of Great Britain. Photographer: Hollie Adams/Bloomberg , Bloomberg

(Bloomberg) -- Amazon.com Inc. is offering its Prime members in the U.K. and Ireland access to Deliveroo Plus for one year, deepening its tieup with the British company beyond its financial investment.

Prime customers will get free delivery on food orders over 25 pounds ($35), the companies said in a statement Wednesday. Deliveroo, headquartered in London, says the arrangement will help it attract new customers and deepen the loyalty of existing users.

Seattle-based Amazon backed Deliveroo when it was a startup, and had a stake of about 12% after the food delivery company’s stock-market debut earlier this year.

Deliveroo also recently hired former Amazon executive Devesh Mishra to be chief product and technology officer. The company reported a surge in revenue and orders in the first half of this year as people kept up orders even as the economy reopened.

Read more: Amazon to Sell Deliveroo Stake of Up to $148 Million in IPO