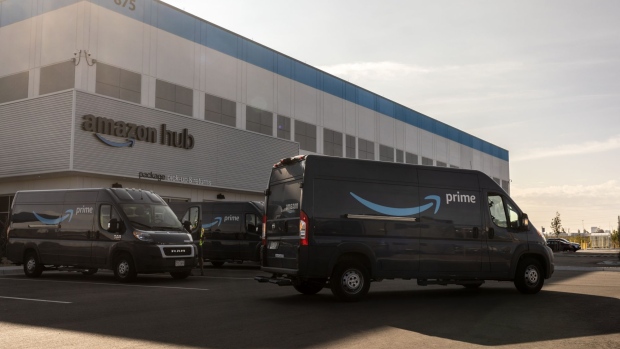 Delivery vans exit from at an Amazon fulfillment center in Denver, Colorado, U.S., on Tuesday, Sept. 28, 2021. Three years ago, Amazon.com Inc. issued an invitation that seemed too good to pass , Bloomberg

(Bloomberg) -- Two U.S. delivery contractors have filed a lawsuit against Amazon.com Inc. alleging that the burdensome conditions of their contract made it difficult to make money.

The lawsuit, filed in Oregon state court and seeking at least $15 million in damages, is the latest sign of tension between Amazon and its delivery partners as the busy holiday shopping season gets under way.

The companies, Triton Transportation LLC and Last Mile Delivery LLC, both began making Amazon deliveries in 2019 and quit in June decrying a lopsided relationship with the world’s largest online retailer.

Their lawsuit alleges Amazon set “unreasonable” expectations about how many deliveries one driver could complete in a 10-hour shift, leaving them stuck with overtime bills. It also alleges Amazon knowingly misrepresented market rates for driver pay in the Portland area, forcing the contractors to make up the difference without compensation.

The plaintiffs further allege that Amazon wouldn’t let them make deliveries using smaller vans suited to navigating some of the city’s narrow streets, putting the public and the drivers at risk and saddling them with costs associated with vehicle crashes and injuries.

An Amazon spokeswoman said the company is still reviewing the lawsuit.

Amazon unveiled its Delivery Service Partners program three years ago, telling aspiring small business owners they could earn up to $300,000 a year by leasing vans, hiring drivers and delivering packages. Some 2,500 such businesses now employ more than 150,000 drivers around the world.

But some business owners have complained that they’re beholden to algorithms that manage the operation and ensure they hit their marks. They say Amazon’s relentless demands have led to driver burnout and high turnover at a time when labor is tight.