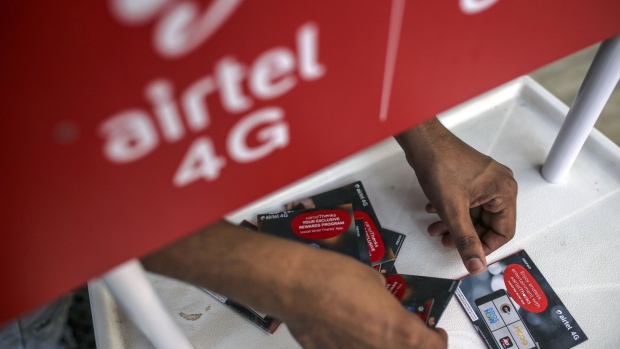 A vendor arranges Bharti Airtel Ltd. SIM card packets at a stall in Mumbai, India, on Sunday, Jan. 19, 2020. Telecom companies including Bharti and Vodafone Idea Ltd. have sought more time from India's top court to pay $13 billion in past dues as they plan to negotiate with the government, people with knowledge of the matter said. Photographer: Dhiraj Singh/Bloomberg , Bloomberg

Amazon.com Inc. is in preliminary talks to buy a stake in No. 2 Indian carrier Bharti Airtel Ltd. for at least US$2 billion, Reuters reported, joining Facebook Inc. and other U.S. giants in betting on one of the world’s fastest-growing internet arenas.

The U.S. online retailer is in early-stage discussions to buy about a 5 per cent stake in the Indian wireless operator, Reuters said, citing anonymous sources.

A deal will help Amazon access Bharti’s 300 million subscribers -- a user base akin to the entire U.S. population.

American technology and investment giants have been buying stakes in Indian companies to build their presence in Asia’s second-most populous nation.

Facebook agreed to invest about US$5.7 billion into a unit of Mukesh Ambani’s Reliance Industries Ltd. in April, while Microsoft Corp. is reportedly considering a stake in the same company.

Amazon already has deep roots in India, where Chief Executive Officer Jeff Bezos has visited and vowed to build one of his biggest e-commerce operations outside of the U.S. Bezos, now the world’s richest man, said during a trip in January that his company would invest another US$1 billion on top of the billions it’s shelled out to bring small and medium-size businesses online.

Amazon is now vying with Walmart Inc.’s Flipkart to tap an increasingly affluent population adopting smartphones at a rapid clip.

An Amazon spokeswoman in India declined to comment. “We routinely work with all digital and OTT players and have deep engagement with them to bring their products, content and services for our wide customer base.

Beyond that there is no other activity to report,” a Bharti spokesperson said.

An influx of capital would be welcome to New Delhi-based Bharti Airtel, which has come under pressure to beef up its offerings ever since Ambani’s technology venture went on a deal spree to secure about US$10 billion in investment from Facebook to KKR & Co.

Airtel’s billionaire Chairman Sunil Mittal may be looking to leverage the diverse businesses in his empire just as Ambani goes into overdrive to transform his oil-and-petrochemicals company into an Indian e-commerce and digital payments titan with Jio Platforms.

In its 25 years of operations, Bharti Airtel has survived frequent policy changes in one of the world’s toughest telecommunications markets.

It lost its position as India’s largest wireless carrier last year to Ambani’s Reliance Jio Infocomm Ltd., which debuted in 2016 and shook up the industry with free calls and cheap data.

The most recent blow to Bharti Airtel came in October, when the nation’s top court in a shock ruling ordered it to pay US$3 billion in back fees.

The technology ambitions of Ambani, Asia’s richest man, have turned the spotlight on his telecommunications rivals, including Vodafone Idea Ltd., the struggling Indian business of British operator Vodafone Group Plc. The Financial Times reported May 28 that Alphabet Inc.’s Google is considering acquiring a stake in that venture. Vodafone Idea said it isn’t currently considering any such proposal.