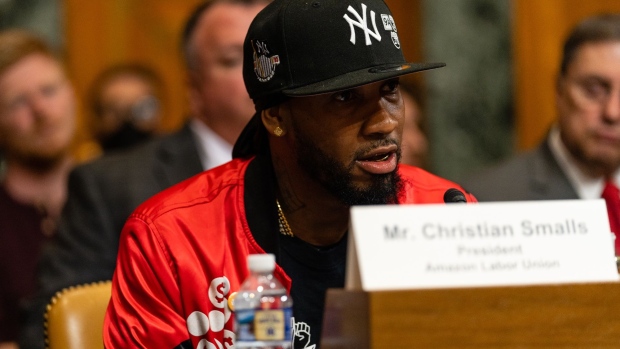 NEW YORK, NEW YORK - MARCH 25: Amazon's JFK8 Staten Island fulfillment center is seen in Staten Island on March 25, 2022 in New York City. Workers at Amazon's Staten Island fulfillment center will be holding in-person voting over the course of the next five days on whether to unionize. If it succeeds, this could be the first U.S. union in Amazon's 27-year history. A union reelection at the company's Bessemer, Alabama, facility will also close today after a nearly two-month voting period by mail. (Photo by Michael M. Santiago/Getty Images) , Photographer: Michael M. Santiago/Getty Images North America

“Over the last several weeks, we’ve spent time evaluating aspects of the operations and leadership at JFK8 and, as a result, have made some management changes,” Amazon spokeswoman Kelly Nantel said in an emailed statement.

She didn’t say how many managers were fired at the facility in Staten Island. But the New York Times reported earlier that six lost their jobs and, citing people familiar with the situation, said they were let go because the union won the election.

Workers at Amazon’s JFK8 facility in April voted to join the ALU despite mandatory “information sessions” designed to discourage employees from voting for union representation.

Amazon is fighting to get the election overturned. In a filing to the National Labor Relations Board last month, the Seattle-based company said the agency repeatedly “failed to protect the integrity and neutrality of its procedures” by turning away voters.

Earlier this week, workers at another warehouse across the street from JFK8 voted not to join the ALU.

Led by fired Amazon worker Christian Smalls, the ALU is trying to organize two more facilities in New York and says Amazon workers across the U.S. have gotten in touch for advice on how to unionize their own facilities.