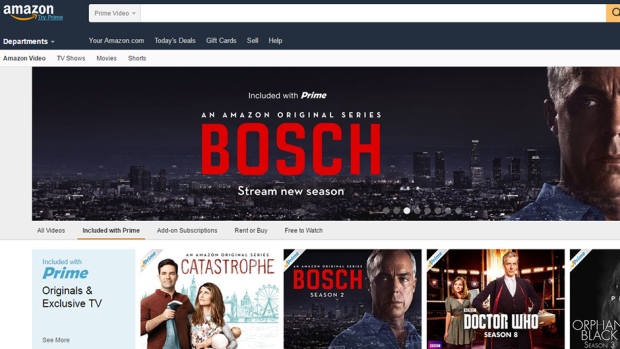 Amazon.com Inc (AMZN.O) will launch its Prime Video service in Canada on Thursday, according to a statement made by Bell Media's president at a Canadian Radio-television and Telecommunications Commission hearing on Tuesday.

In her opening statement, Mary Ann Turcke spoke about the challenges that Canadian broadcasters face today amid rising competition from global streaming services like Netflix and the upcoming debut of Amazon.

“Now a new global OTT [over-the-top content] competitor – Amazon Prime is entering the Canadian market in just two days. So it’s not just our fellow Canadian broadcasters who will try to outbid us for a first run, original programming,” Turcke said, “but it’s Netflix and now Amazon, two entities that are not subject to the same regulatory requirements as us and that have astronomically more buying power than we do.”

Speculation of a Canadian launch of Prime Video has grown in recent weeks after former Top Gear host Jeremy Clarkson tweeted about the global debut of his new Amazon original show, The Grand Tour.

So. People of Ireland, Canada, Australia and pretty well everywhere else. You WILL be able to watch the Grand Tour. Amazon has gone global.

Amazon CEO Jeff Bezos then clarified in a tweet of his own that the show would be available globally by December.

Long wait is over… Clarkson, Hammond, May are back… #TheGrandTour premieres tonight in UK, US, DE, JP. And globally in Dec. pic.twitter.com/dfQjGGuDFW

Turcke's comments come after a number of sources also confirmed to BNN that Amazon's launch of its Prime Video service in Canada is imminnent. One of Canada's best-known film producers Robert Lantos, told BNN in a television interview earlier this month that "Amazon [Prime Video] is coming any day."

Lantos added: “They have unofficially said they are coming soon. They started streaming in Australia (today)…I think we are next.”

Two sources familiar with Amazon’s plans confirmed to BNN that Prime Video’s launch in Canada is coming soon. Amazon has been quiet about discussing the exact date of its launch, even with its Canadian partners.

“We’ve been told it’s happening, so we’re just waiting for more information,” said one of the sources, who didn’t want to be named.

Rolling out its video offering in Canada would set the stage for a fresh round of competition amongst streaming services. Both Netflix and Crave TV (which, like BNN, is owned by Bell Media) have seen their audiences grow, as more consumers seek to watch movies and TV shows on digital devices.

“Amazon takes a thoughtful approach to video,” Smiletime CEO Alex Kruglov, who previously served as head of content acquisition for U.S. streaming service Hulu, told BNN. “Its core focus is on growing the community of Prime. And entertainment is an important vertical for them.”

Amazon has been investing heavily in original programming to entice more of its customers to sign up for its Amazon Prime shipping service. In the United States, Amazon charges a US$99 annual fee for free, two-day shipping on all items -- plus Prime Video, which offers both its own shows and licensed TV and movie programming.

Amazon Prime launched in Canada in 2013. The two-day shipping service currently costs $79, in part because it has not introduced free movies and TV shows. One source with direct knowledge said Prime Video will be made available to existing Amazon Prime customers and that the cost of Amazon Prime will not be changing immediately.

Amazon has been quietly acquiring Canadian rights to a range of programming over the past year, according to two sources with direct knowledge of the company’s talks. Potential sellers of rights could include Sony, Fox, Entertainment One, and NBCUniversal.  BNN reached out to all the companies, but they did not immediately respond to requests for comment.

As for the Canadian rights to Amazon’s original shows, that’s a bit more complicated. Prior to the planned launch of Prime Video in Canada, the rights to some Amazon originals had been sold to other streaming services. The award-winning show Transparent, for example, has been available on Shomi, a service launched two years ago by Rogers Communications and Shaw Communications. Bosch, another Amazon original, has been available on Crave TV.

“Amazon has been holding on to the worldwide rights for some of its more recently produced shows,” one source familiar with Amazon’s plans told BNN. “One example is The Man in the High Castle. They’ve been shelving its release in countries outside the U.S. so they’ll have it available for the global release of Prime Video. As you can see, they’re doing the same with Jeremy Clarkson’s new show”

“When you launch a fully global service, the amount of content available in each country is pretty small and not always top shelf,” according to Kruglov, formerly of Hulu. “Netflix has been aggressively bidding for worldwide rights. Now, the movie studios will have another buyer.”

The recently announced shut down of Shomi sparked speculation about Amazon’s own push in Canada. Shomi is set to cease operations on Nov. 30. It’s not entirely clear which programs, if any, licensed by Rogers and Shaw would be available to Amazon at this time; that’s because of the existing agreements Shomi, Shaw and Rogers have. Regardless, a Rogers executive told BNN at the time of Shomi’s shutdown announcement, “it’s only a matter of time before Amazon announces its launch.”