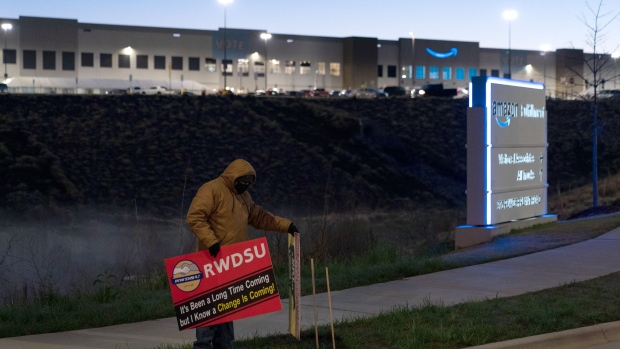 (Bloomberg) -- Amazon.com Inc. and the Retail, Wholesale and Department Store Union are making their case at a National Labor Relations Board hearing starting Friday on the labor group’s bid to set aside its defeat in the closely watched election to unionize an Alabama fulfillment center.

In an April 16 complaint, the RWDSU accused Amazon of misconduct -- including issuing anti-union threats, firing an employee for distributing union cards and pressuring workers to cast their votes in a mailbox the company got installed in a tent on its property, in view of surveillance cameras.

The union plans to present witnesses to testify that Amazon consultants or supervisors told employees that if they voted for the union, “Jeff Bezos would not lose any money by taking the Amazon name off the building and shutting the facility down,” according to an April 30 labor board ruling.

The union is also alleging that managers told employees that Amazon had already “stopped or slowed construction in the Birmingham and Mobile areas because of the union campaign,” that pro-union employees were moved to a different floor of the building where there would be fewer co-workers for them to talk to and that Amazon “required employees to sign a piece of paper saying they had voted,” according to the labor board’s description of the claims.

In her ruling scheduling the hearing, acting NLRB regional director Lisa Henderson wrote that evidence presented there by the union “could be grounds for overturning the election.”

Amazon has denied wrongdoing. “Despite heavy campaigning from union officials, policymakers and even some media outlets, our employees overwhelmingly rejected the union’s representation,” Amazon spokesperson Kelly Nantel said in an email. “Rather than accepting that choice, the union seems determined to continue misrepresenting the facts in order to drive its own agenda. We look forward to presenting the facts of this case.”

The RWDSU received 738 “yes” votes in the seven-week mail-in ballot election, while Amazon garnered 1,798 nos on whether to unionize. Contested ballots, most of them disputed by Amazon, according to the union, totaled 505 and weren’t opened.

The labor board has the authority to invalidate election results in response to conduct that could have changed the outcome and prevented employees from making a free choice about whether to unionize. Challenges to election results are considered by regional labor board officials, whose rulings can then be appealed to board members in Washington. The NLRB has five seats, with staggered terms; Republicans are slated to hold a majority of them until August.

A successful appeal by the union would likely lead to a new election. Failing that, the RWDSU would have to wait at least 12 months and also sign up enough employees to again demonstrate substantial support for the proposed bargaining unit.