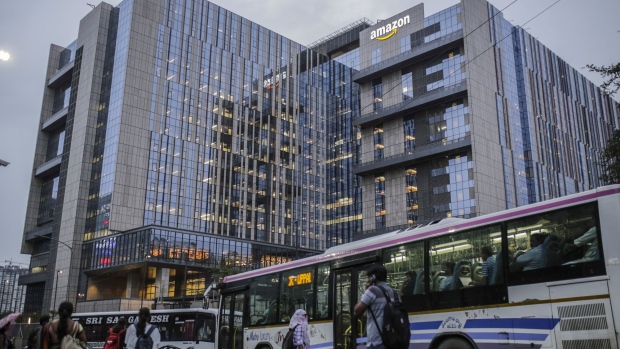 Buses travel past the Amazon.com Inc. office campus in Hyderabad, India, on Friday, Sept. 6, 2019. Amazon's only company-owned campus outside the U.S. opened at the end of August on the other side of the globe, thousands of miles from their Seattle headquarters. The 15-storey building towers over the landscape in Hyderabad's technology and financial district, signaling the giant online retailer's ambitions to expand in one of the world's fastest-growing retail markets. Photographer: Dhiraj Singh/Bloomberg , Bloomberg

(Bloomberg) -- Amazon.com Inc. has enabled exports of India-made goods worth $3 billion and created over a million jobs since it began operating in the Asian nation, its country chief said.About 250,000 new sellers have joined Amazon.in since January last year and more than 50,000 offline retailers and neighborhood stores are now selling on the platform, the ecommerce giant said in a Thursday announcement. It helped create over 300,000 direct and indirect jobs and notched up $1 billion of exports during the same period.“Covid-19 has made businesses realize they need to be more resilient, robust because there’s no notion of only offline or only online anymore,” Amazon India chief Amit Agarwal said in a phone interview on Thursday to discuss the unit’s progress. “The internet is like electricity, everybody will use it.”