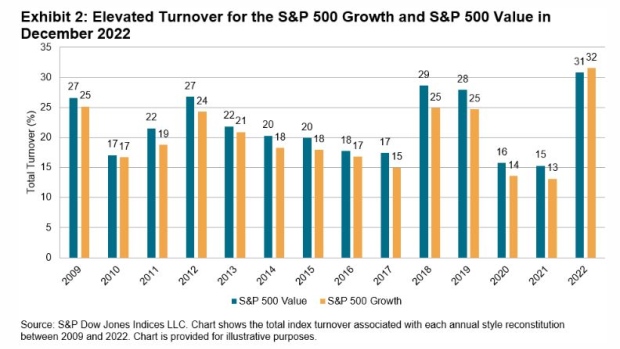 (Bloomberg) -- The death of the cheap-money era is redrawing Corporate America’s earnings map — upending a decade of Wall Street wisdom over which stocks are the bargain buys or the high fliers of tomorrow.

With all bets off on the inflation-lashed economic trajectory, gone are the days when the tech mega caps easily fall into the category of fast-growing corporations while oil shares trade at cheap valuations. Now growth-fund managers, who rode the bull market by simply gorging on the tech superstars, are increasingly buying shares traditionally seen as value bets. And vice versa.

As the lines blur between two of the most popular stock investing styles, the largest index managers are far apart on classifying the likes of Amazon and Exxon. That’s making life even harder for stock managers reshuffling their holdings like never before.

Take Stephen Yiu, who amassed $1 billion in less than five years by betting on the tech boom. These days, the manager of the £735 million Blue Whale Growth Fund is trying to explain to clients why he sold off all his shares in Meta Platforms Inc. and Alphabet Inc.

“We’re now trying to tell people we’re not a tech fund, and so hopefully people will understand, but some of them still have this perception, like ‘why are you getting into energy? That’s not tech,’” Yiu said.

In a bid to bounce back from a 28% loss in 2022, the London-based investor is now touting new picks in old-economy sectors like energy and railroad — traditionally seen as value bets in the days of low interest rates.

Differences on how to define investing styles like value and growth are par for the course for both discretionary and quant managers. Yet the scale of the current divergence in view is notable — and index classifications matter given about $800 billion of cash is tracking these strategies in the exchange-traded fund world alone.

During a decade of a sluggish economy and easy monetary policy, growth investing was seen as a pure and simple bet on tech, an industry whose expansion, in stock prices and earnings, towered over all others. Yet after the pandemic-induced boom, software and internet firms saw their momentum peter out in a climate of rising bond yields. Meanwhile, a supply shock as a result of the Ukraine war, along with a recovery in global demand, powered commodity prices in a super cycle of sorts.

Now equity investors are having a hard time figuring out which stocks are inherently cheap looking and those that will exhibit an enduring tendency to post strong earnings growth.

“Before you can easily say tech is growth and energy is value, but now the line between the two is kind of murky and it’s not clear cut as before,” said Brian Frank, whose Frank Value Fund has counted a tech firm, PayPal Holdings Inc., as one of its top stock holdings. “Value investors ignoring growth is a mistake.”

In its annual reconstitution in December, growth and value indexes run by S&P Dow Jones Indices saw record turnover, with almost a third of their market capitalization affected, according to Hamish Preston, director of US equity indices. Energy’s representation in the growth segment jumped to 8% from 1.4%, thanks to a surge in share prices — the only industry with positive returns last year — and a wave of earnings upgrades. On the value side, tech saw its weighting increase by 6 percentage points to 16.8% as the industry became home to many of the market’s biggest losers and analysts cut their estimates.

Amazon, for example, is still included in the S&P growth index but has a higher weighting in its new home – the value gauge — after entering the latter for the first time in December.

S&P’s style benchmarks were linked to roughly $380 billion of assets as of the end of 2021, according to the latest data available.

There is speculation that S&P’s rival, FTSE Russell, may follow suit during its yearly reconstitution in June to reflect the reversal in industry fortunes if the trend holds.

For now, big discrepancies have emerged between index providers. While Exxon ranked number four in the growth cohort of the S&P 500 as of Friday, it had no representation of the same style in the Russell 1000 Index. Similarly in value, Amazon occupied a top spot in the S&P but held zero bearing in the Russell.

Meanwhile, S&P put Netflix in the value camp while the Center for Research in Security Prices — whose indexes run the largest value and growth ETFs, both from Vanguard — kept it in growth.

For investors looking to gauge how long the value revival can continue, it makes for a messy picture. Based on S&P indexes, the valuation of growth relative to value is in the 40th percentile — looking reasonable. At Russell, it’s in the 82nd percentile — still pricey. The gap between the two measures is the widest in 20 years, according to Citigroup Inc. strategists including Scott Chronert.

“Historically the two delineations of style (S&P, Russell) have not been too far opposed,” they wrote in a note earlier this month. “Therefore, it is possible that we could see similar shifts when the Russell indices go through their annual reconstitution mid-year.”

And there is no guarantee that tech’s rise or energy’s fall will last. Weeks into 2023, their fate has reversed again with tech now running ahead amid speculation the Federal Reserve will raise rates more slowly on signs of inflation peaking. The tech-heavy Nasdaq 100 is up nearly 8% this year, compared with 4% for the S&P 500.

“We can’t predict what will happen in the upcoming reconstitution,” said Catherine Yoshimoto, director of product management at FTSE Russell, an LSEG business. “That being said, our style indexes are constructed bottom up, meaning that we aren’t trying to target a certain sector allocation. It will be an outcome of each underlying company’s style variables.”

--With assistance from Isabelle Lee.