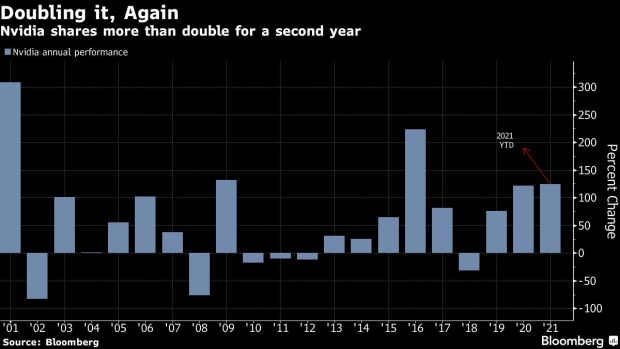 After trailing the rest of its megacap technology peers this year, Amazon is poised to outperform in 2022 as it benefits from resurgent growth in a range of markets such as e-commerce, cloud computing and advertising, analysts including Eric Sheridan wrote in a note, making the stock their top pick among U.S. Internet names.

Goldman’s endorsement is the latest show of support for Wall Street’s most-loved megacap in a year in which Amazon failed to keep pace with the S&P 500 Index. The stock has gained nearly 10% in 2021 as it grappled with a re-opening economy, rising labor costs and supply chain disruptions. The benchmark index is up about 25%.

Despite two consecutive quarters in which Amazon missed revenue estimates, all 60 analysts tracked by Bloomberg that cover the stock have maintained their buy ratings. That level of bullishness is unmatched by Alphabet Inc., Apple Inc., Microsoft Corp. and Facebook parent Meta Platforms Inc.

“We see Amazon as a top pick on a 12-month view with an increasingly positive skew in its risk/reward after a pronounced period (16+ months) of share underperformance,” Sheridan and his colleagues wrote. Goldman’s $4,100 price target implies a gain of about 16% from current levels.

The tech sector as a whole has held up well in the past two weeks, despite a spike in U.S. Treasury yields. Rising yields tend to discount the present value of future profits and higher rates put pressure on the shares of technology companies with high valuations.

A strong earnings season is one reason the sector has performed well, according to Peter Andersen, founder of Andersen Capital Management. “Yes, they are facing higher rates, but they also have higher earnings, so I don’t think there will be a catastrophic effect,” Andersen said in an interview.