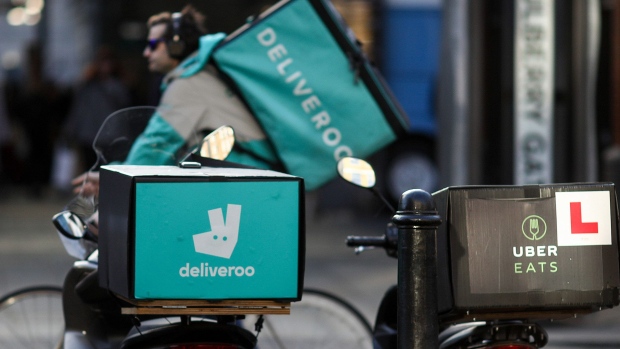 (Bloomberg) -- Amazon.com Inc. has offered Deliveroo a loan after a U.K. probe into the food-delivery startup’s last funding round threatened a cash crunch, people familiar with the matter said.

Without the backing from Amazon, Deliveroo ran the risk of running low on capital, the people said. While the size of the loan is unclear, the London-based company has significant funds to continue operating, they said, asking not to be identified because the matter is private.

Amazon led a $575 million investment into Deliveroo in May. It was frozen in a surprise move by the Competition and Markets Authority, which has said Amazon’s bid to buy a minority holding in the company had the potential to damage competition in restaurant and grocery delivery. The U.K. competition regulator said last month that it would conduct an in-depth investigation of Amazon’s approximately $500 million investment and will rule on the deal by June 11.

Amazon’s loan will be converted into equity if the CMA approves the original deal, the people said.

Deliveroo had about 185 million pounds ($240 million) in cash and cash equivalents at the end of 2018, according to its latest annual report. While global sales increased 72% in 2018, its net loss before tax widened to 232 million pounds.

The intervention signals Seattle-based Amazon’s commitment to expand in the restaurant food delivery market, after winding down its own service in the U.K. and the U.S., which failed to win significant market share.

Amazon Prime offers grocery deliveries to major British cities within two hours, but it faces domestic competition from the likes of Ocado Group Plc, an online grocery pioneer that makes its own deliveries and licenses its technology to traditional food shops.

While Deliveroo waits for the deal to be approved by the CMA, rivals are busy consolidating. Takeaway.com NV last week declared victory in the battle for Just Eat Plc, while Germany’s Delivery Hero SE said in December it would take control of South Korea’s biggest food delivery app, Woowa Brothers Corp. Prosus NV is also looking to continue doing deals in the sector after losing out in the Just Eat deal.

To contact the reporter on this story: Giles Turner in London at gturner35@bloomberg.net

To contact the editors responsible for this story: Tom Giles at tgiles5@bloomberg.net, Amy Thomson, Nate Lanxon