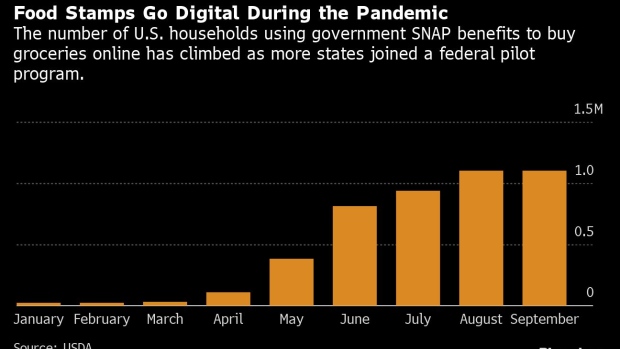 (Bloomberg) -- Ian Babcock used to take the bus from his home in northern Michigan to get groceries, a trip that was inconvenient before the pandemic made it dangerous. For the last several months, he’s been using his food-stamp benefits to get groceries delivered by Amazon.

“It potentially is a lifesaver for me,” he said.

Babcock is among one million-plus U.S. households now using government benefits each month to buy groceries online. Their numbers spiked 50-fold this year after the spread of Covid-19 prompted the U.S. Department of Agriculture to make it easier for food-stamp recipients to shop on the web. While the USDA declined to provide an industry breakdown of such purchases, the main beneficiaries are Amazon.com Inc. and Walmart Inc. -- the only retailers in most states to take part in the agency’s online shopping pilot.

For Seattle-based Amazon, the USDA program is an opportunity to get a chunk of the $55 billion that food-stamp recipients spent last year, purchasing that surged 20% in the first four months of 2020. It also lets the company court a cohort that has traditionally patronized Walmart or other discount grocers. Amazon is nearing saturation with higher-income U.S. households and has few other sources of new, potentially loyal customers in its most important market.

The 1.1 million households that bought subsidized groceries online in September represent a small fraction of total food aid; more than 22 million households participated in the Supplemental Nutrition Assistance Program in April, according to the most recent overall program data. But it’s made a difference for people who’d rather not risk a trip to the store.

When Michigan joined the program in May, Babcock, who suffers chronic health problems and has a suppressed immune system, started using his benefits to buy groceries on Amazon. The 55-year-old former financial planner, computer programmer and self-described veteran of Detroit’s hardcore punk scene, also has a discounted Prime membership available to holders of Electronic Benefits Transfer (EBT) cards. Referring to Amazon Chief Executive Officer Jeff Bezos, he said “the guy is making money hand over fist, but he’s providing a service I can’t get elsewhere.”

The USDA food assistance program, launched decades ago to help the poorest Americans, tiptoed into the 21st century last year with a pilot that lets participants use their EBT cards to buy groceries online, for delivery or pickup. The scheme began with a trial in New York with Amazon and Walmart and, later, Wakefern Food Corp.’s ShopRite stores.

As business shutdowns to limit the spread of the coronavirus added tens of millions to the unemployment rolls, Congress loosened restrictions on food assistance. The USDA quickly expanded the online program, which is available today for shoppers in 46 states and the District of Columbia. In Washington state, about 3% of food aid spending in September was paid for online – the vast majority for pickup -- up from 1.7% in March, when Covid-19 began to spread, according to the Washington State Department of Social and Health Services.

Organizations working to eliminate hunger cheer the program’s growth but, citing limited data from the government and participating retailers, are reluctant to say the online pilot is meeting all the needs of people, particularly those with mobility or health issues. Some worry the predominance of two large retailers comes at the expense of local grocers. (USDA said in a statement last week that more retailers would soon join.) Both Amazon and Walmart have been criticized by activists who say the large number of SNAP recipients on their payrolls is evidence they treat workers poorly.

Andy, a southeastern Pennsylvania resident who asked Bloomberg not to reveal his surname, tried to start shopping online in September, when a rise in Covid-19 cases made him reluctant to go to stores. He used his EBT card to get a discounted Prime membership, thinking it would open up more food delivery options. Amazon offers membership, typically $119 a year, to EBT holders for the annual equivalent of $72, though participation isn’t required for food-stamp use.

Instead, Andy discovered Amazon Fresh wasn’t available at his address, and the company’s Whole Foods Market chain was excluded entirely from the pilot. Then Amazon’s payment system locked him out when he tried to load social security benefits to a gift card. He’s considering buying shelf-stable products, or ordering delivery from Walmart, a retailer he’d previously avoided. “I’m very disappointed and stressed out,” Andy said. “Just trying to stay safe and stay properly fed.”

Still, he plans to hang onto the Prime membership for video streaming and other perks.

Analysts say serving SNAP recipients could help Amazon expand its customer base, which tends to attract a more affluent shopper. Consumer Intelligence Research Partners estimates that U.S. Prime subscribers have an average household income of about $78,000, some 15% more than the median.

“Amazon is probably not a place SNAP participants typically think of,” said Ed Bolen, a senior policy analyst with the Center on Budget and Policy Priorities who studies the SNAP program.

In an emailed statement, Amazon’s director of underserved populations, Kristina Herrmann, said the company believes the program “will dramatically increase access to food for more customers and are excited about the adoption thus far.” Amazon says Fresh is available in “most metropolitan regions” and those who live elsewhere can purchase non-perishable items from the main site.

“We know this is a very important development for our customers that we worked closely with the USDA to push forward,” Walmart spokesperson Molly Blakeman said by email. More than half of the company’s 4,700 U.S. stores offer delivery while 70% offer grocery pickup, she said.

Ruth Ilano, a comic artist in Massachusetts with multiple sclerosis, was making a quick trip to the store in May when she collapsed. She hasn’t gone inside a supermarket since and is using SNAP benefits to help pay for groceries online.

“Online delivery was previously a nice touch,” she said. “But now it’s absolutely essential to my life.”