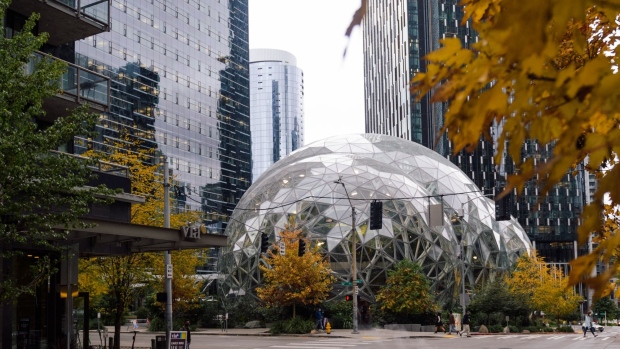 A delivery worker travels past the Amazon Spheres, part of the Amazon headquarters campus, in the South Lake Union neighborhood of Seattle, Washington, U.S., on Friday, Oct. 22, 2021. Concerns about Covid, crime and homelessness — and open warfare between the city government and parts of its lucrative tech and business sector — have emptied Seattle's commercial districts. Voters are hoping a new mayor will turn things around — but even though most are Democrats, they disagree on what change is needed. , Bloomberg

Amazon has effectively stopped recruiting for new roles companywide, broadening a pullback in hiring that had already affected various teams in recent weeks, including the profitable advertising business. The latest announcement doesn’t apply to frontline jobs in the operations and transportation groups, where hundreds of thousands of hourly workers pack and ship items.

Senior executives made the decision to pause corporate hiring this week, human-resources chief Beth Galetti said in a corporate blog post on Thursday.

“We anticipate keeping this pause in place for the next few months, and will continue to monitor what we’re seeing in the economy and the business to adjust as we think makes sense,” Galetti wrote.

Depending on the business, Amazon may replace employees who depart, and there are some “targeted places” where the company will add to its ranks, she wrote, adding that the company plans to hire “a meaningful number of people” in 2023.

Amazon almost doubled its headcount during the pandemic to handle a surge in orders from home-bound shoppers. When consumers returned to their previous shopping habits this year, the company began trimming the ranks of its logistics operation. As the economic outlook darkened and it became clear that a slowdown in online sales growth was here to stay, cuts spread to Amazon’s corporate offices.

In addition to its hometown of Seattle, where Amazon is the largest corporate employer, the company has major corporate and research and development outposts near Washington, the San Francsico Bay Area, Los Angeles and Austin, among other cities.

The company at the end of September employed 1.544 million people worldwide, up about 6% from a year earlier. Last month, Amazon said it would tack on about 150,000 seasonal workers to handle the holiday shopping season, the same figure as the prior year.

(Updated with details and context beginning in the second paragraph.)