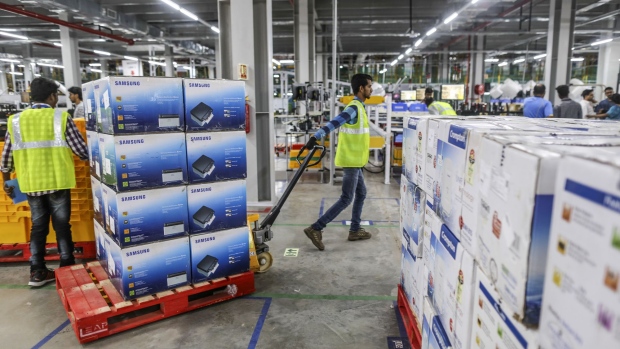 (Bloomberg) -- Amazon.com Inc. plans to hire 150,000 seasonal staffers, about 50% more than last year as the company seeks a cushion of workers to help it meet demand during the holiday shopping period.

The world’s largest online retailer typically hires legions of temporary workers this time of year to help store, pack and ship items from its warehouses. Since the pandemic supercharged online shipping last year, Amazon has been rapidly expanding its logistics operation, opening warehouses or smaller, urban delivery depots at a pace of roughly one per day. In September, the company said it had already opened 250 U.S. logistics facilities in 2021 and would inaugurate an additional 100 that month alone.

Amazon said on Monday that the average starting pay of jobs in the U.S. was $18 an hour. Facing fierce competition for entry-level workers, the company has also been offering signing bonuses of as much as $3,000, depending on location, and as much as an additional $3 per hour for workers willing to work overnight or weekend shifts.

During the company’s earnings call with analysts in July, Chief Financial Officer Brian Olsavsky said wage pressure was starting to show up in the company’s expenses. “While we have very good staffing levels, it’s not without a cost,” Olsavsky said.

Amazon, the second-largest private U.S. employer after Walmart Inc., employed 1.3 million people at the end of June. Last year at this time, the company said it would hire about 100,000 seasonal workers.