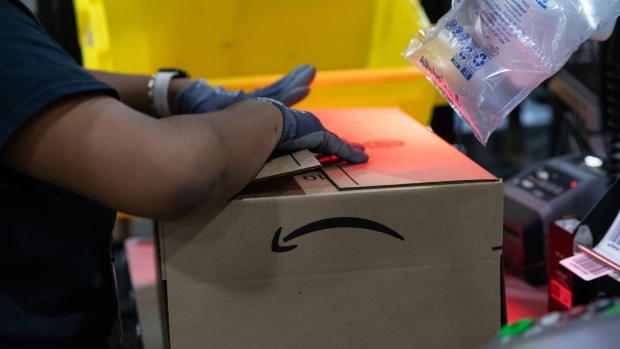 A worker assembles a box at an Amazon fulfillment center on Prime Day in Raleigh, North Carolina, U.S., on Monday, June 21, 2021. Amazon.com Inc.'s annual Prime Day sale, which begins Monday, arrives as the world grapples with the lingering effects of the pandemic. , Bloomberg

(Bloomberg) -- Amazon.com Inc.’s number of Prime members in the US stagnated in the first half of the year, suggesting a $20 annual price increase that took effect in February may be turning off potential customers struggling with high gas prices and inflation.

The online retailer had about 172 million members as of June 30 who pay yearly or monthly dues in exchange for shipping discounts, video streaming and other perks, the same as six months earlier, according to Consumer Intelligence Research Partners, a Chicago firm that tracks Prime members through consumer surveys.

Amazon in February raised the price of Prime membership to $139 from $119 for those paying yearly and to $14.99 from $12.99 for a monthly subscription. The higher prices combined with inflation and the resumption of pre-pandemic shopping habits by consumers to cool demand for the service, known mostly for quick delivery of online orders.

“After years of steady and even explosive growth, Prime membership is flat,” said Michael Levin, a partner in the research firm.

The Seattle-based company signed up a combined 60 million U.S. Prime members in 2020 and 2021 when shoppers stampeded online during the pandemic, according to Consumer Intelligence Research Partners. The firm tallies Prime members, not subscriptions. One Prime subscription can have multiple members since many households share one account.