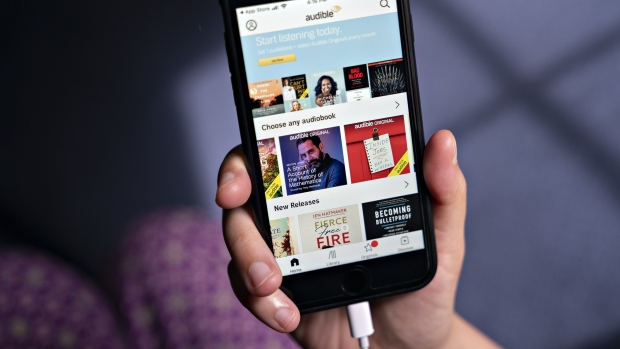 The Audible application is displayed on a smartphone in an arranged photograph taken in Arlington, Virginia, U.S., on Thursday, May 21, 2020. Audible's, the audiobook service owned by Amazon.com Inc., big push into the booming audio genre has confused some producers and podcast networks because it is happening at the same time that Amazon Music, a separate division of the e-commerce giant, is also ramping up its investment in podcasts. Photographer: Andrew Harrer/Bloomberg , Bloomberg

Audible is rolling out a cheaper version of its popular audiobook service that includes original series from Hollywood talent, part of a drive to go beyond books and win over podcast listeners.

Audible Plus will cost US$7.95, about half the price of the main plan, and include more than 11,000 titles spanning audiobooks, original series and podcasts, the company said Monday. The upcoming slate of new programs includes projects from musicians Common and St. Vincent, as well as actors Jesse Eisenberg and Kate Mara. The catalog will be available to existing Audible users Monday, and the new plan will go on sale later this week.

Having taken a dominant position in audiobooks, the Amazon.com Inc. division has been trying to break into the booming market for podcasts and other nonmusic audio. The company has commissioned programs from best-selling authors and celebrities, emerging as one of the biggest backers of original audio shows.

The cheaper plan is the clearest sign yet of Audible’s ambitions to compete with Spotify Technology SA as the go-to app for millions of listeners interested in nonmusic audio. This is the first time Audible has offered such a large selection of shows as part of a monthly subscription -- rather than requiring people to buy individual titles.

”It’s a magical moment in the renaissance of audio, and we want to be at the forefront of that,” said Rachel Ghiazza, Audible’s head of U.S. programming. Ghiazza identified a new project with Eisenberg as a prime example of what the company is attempting.

“It’s kind of a podcast, kind of an audiobook and kind of live theater,” she said. Audible began developing the project with Eisenberg after he recorded audio for a collection of poems.

Under Audible’s previous model, subscribers paid a monthly fee in exchange for credits to buy books. That meant customers would only use the service when they had new books or credits. With the new approach, subscribers to will get access to a deeper library of shows, including contributions from actress Jamie Lee Curtis, basketball star Blake Griffin and best-selling author Tayari Jones.

Customers can still pay to listen to new books or select originals not included in the subscription. That same library will be part of the current plan, renamed Audible Premium Plus, which also includes a monthly credit for an audiobook.

But Audible is betting this new library will make its app a daily stop in the growing competition for listeners.

Spotify has been making its own push in the podcast market. It spent more than US$1 billion acquiring companies and funding original audio series, emerging as the second-most-popular podcast platform after Apple Inc. Though Apple remains the dominant player in the U.S. and many international markets, it has yet to commit to fund original audio programming in a big way. Both Spotify and Apple offer thousands of titles for free.