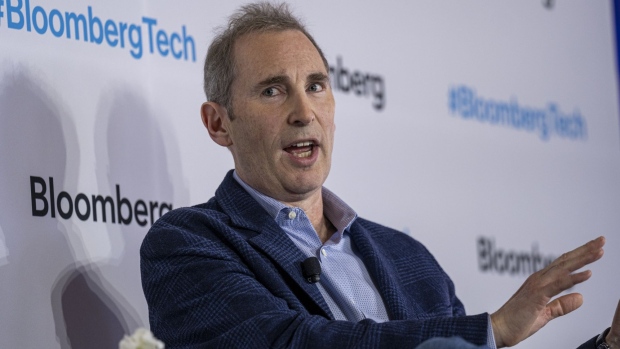 Andy Jassy, chief executive officer of Amazon.Com Inc., speaks during the Bloomberg Technology Summit in San Francisco, California, US, on Wednesday, June 8, 2022. The summit highlights the ways in which society has been changed by digital disruption and provides the roadmap for what lies ahead. , Bloomberg

(Bloomberg) -- Amazon.com Inc. Chief Executive Officer Andy Jassy, in a wide-ranging interview at the Bloomberg Technology Summit in San Francisco, discussed the departure of his consumer chief and pledged to keep investing in such moonshots as autonomous vehicles, video streaming and internet satellites.

Asked about the departure of Dave Clark, who is leaving to run logistics software startup Flexport Inc., Jassy said he doesn’t blame the 23-year veteran for moving on to something new.

“I think that Dave wanted a different gig at this point, and I don’t begrudge him at all,” Jassy said Wednesday.

Clark was instrumental in building Amazon’s massive warehousing and logistics network, which proved to be a lifeline for many shoppers during the pandemic. But the company has too many workers and warehouses now that consumers have returned to their usual spending habits, and Amazon is seeking to sublease some of its facilities. Amazon during the first quarter posted its first loss in seven years and the slowest revenue growth since 2001.

Jassy said the company had made the decision early in the pandemic to err on the side of having too many workers and too much warehouse space rather than too little. “We knew it might mean that we might have more capacity for some short period of time,” he said.

Turning to the global supply chain, he said there were still “a lot of challenges” that wouldn’t recede soon. Amazon is placing orders from suppliers significantly earlier than it used to and has worked to get access to more ports, he said.

Despite slowing online sales growth and harbingers of a global recession, Jassy said Amazon was continuing to invest in big bets -- including building a grocery chain, launching a constellation of internet-beaming satellites, Alexa software and Zoox, the company’s autonomous taxi subsidiary.

Lord of the Rings

Jassy expressed optimism about Amazon’s streaming video businesses even as rival Netflix Inc. lays off staff amid subscriber losses. “I’m incredibly encouraged about what we have coming” in Prime Video, he said, including a big-budget series set in the Lord of the Rings universe. Some of the assets from its recently acquired film studio Metro-Goldwyn-Mayer “will go very well with what we’re doing entertainment-wise,” he added.

The CEO said he didn’t know if all of these moonshots would be a long-term success but said if any met Amazon’s goals “we’re a completely different company.”

Workers at an Amazon warehouse in New York’s Staten Island voted earlier this year to join the upstart Amazon Labor Union. The company is challenging the result. The same group failed in a second vote at a smaller facility, but Amazon faces organizing efforts from unions across the US who accuse the company of pushing punishing productivity goals at the expense of worker safety.

It’s up to Amazon workers whether to join a union, Jassy said, echoing US labor law that codifies that right. “We happen to think they’re better off without a union,” he added, saying it’s easier for managers to get feedback from employees and for teams to make improvement on the fly under the current regime.

Jassy also sought to rebut persistent criticism that Amazon is a sometimes abusive operator of its third-party marketplace, which hosts millions of sellers. Some of those small businesses have long said the company pushes them to use extra services like logistics and advertising that cut into their profit. They also claim Amazon’s largely automated system leaves them little recourse when something goes wrong, complaints that have found receptive ears in Congress and among US regulators.

Amazon was working to improve services for sellers, and Jassy said “we agonize over every single email or communication we get from sellers that’s, you know, critical or where they’re unhappy.” Still, he said, “a lot more sellers are happy with Amazon than unhappy with Amazon.”

Online merchants throng to Amazon in part because they can easily reach the company’s millions of customers, he said. A large customer base, he added, is much more compelling than e-commerce software that lets merchants set up their own web stores. Shopify Inc. and other e-commerce software startups thrived during the pandemic by helping businesses sell directly to shoppers.

Jassy said his predecessor, Jeff Bezos, who remains Amazon’s executive chairman, is still involved at the company despite spending more time on philanthropy and his space company Blue Origin.

“It’s very useful for me to be able to seek his counsel,” Jassy said. “He did the job for so long, and he’s always made himself available.”