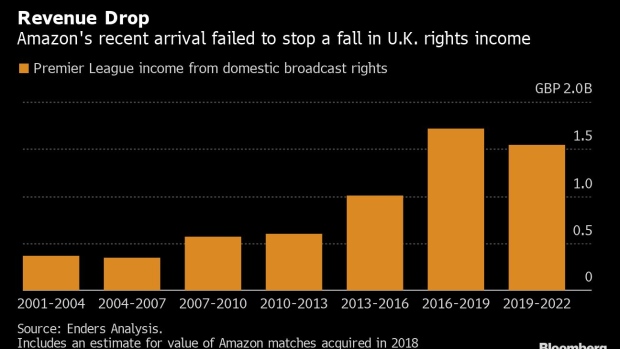 (Bloomberg) -- Amazon.com Inc. needs to shake off a patchy record in live sports when it brings the world’s richest soccer competition to millions of fans from Tuesday.

The e-commerce giant’s Prime Video service takes over the English Premier League from regular broadcasters Sky and BT for 20 matches this month, the first time a streaming platform has assumed full responsibility for showing the competition. Six overlapping games on Wednesday, including Liverpool’s clash with local rival Everton and Manchester United’s battle against Tottenham Hotspur, are set to push video-on-demand technology to its limits.

Fans will demand the production and delivery to be free of the technical glitches that have dogged Amazon in the past. They’re already paying as much as 67 pounds ($87) a month for the Premier League on Sky and BT Group Plc, and are now being asked to sign up for an Amazon Prime subscription to catch all the matches. In the U.K., Amazon’s Prime service costs 7.99 pounds a month after a 30-day trial.

“What you’re hoping is that people are focused on the games -- why did the manager field those players? Who is out on left wing today? If that’s what they’re discussing in the match chat rooms, then you know things are going well,” said Steve Miller Jones, head of product strategy at Limelight Networks, which operates a content delivery network for over-the-top video service providers.

If engineers can deliver seamless access, perfect images and audio and flawless match coverage, it won’t only be Amazon who’s celebrating. The company would become a more serious contender for the main broadcast rights, and more bidders mean more money for the Premier League’s 20 clubs. It would also pose a more daunting long-term threat to Comcast Corp.’s Sky.

Viewers can be unforgiving. When Amazon’s U.S. Open tennis coverage last year was hit by poor picture quality, a lack of replay options and limited choice of games, more than 80% of viewers gave it a 1-star rating, based on almost 700 reviews.

A representative for Amazon declined to comment on the technical challenges of showing the matches. In a statement, Amazon said that live sports is “a new attractive area for us,” and is something customers are seeking out. “It is still Day 1 for us in sports. We will continue to listen to our customers and go from there and we are definitely excited about the future.”

Amazon will be successful with the Premier League matches if viewers don’t spot much of a difference from Sky’s coverage. It has recruited well-known presenters and commentators from Sky and Champions League broadcaster BT. To offer something fresh, it’s added new soccer-related content in the runup to the games and began a weekly soccer chat show, “Back of the Net,” hosted by former England star Peter Crouch.

“Sport is an important tactical component of Amazon’s content arsenal,” said Richard Broughton of research firm Ampere Analysis. “There are segments for whom sport is absolutely key -- and attracting these consumers without sports rights investment is very challenging indeed.”

Amazon spends around 1% of its content budget on sports, said Broughton. It’s hoping the relatively modest investment in the Premier League -- around 90 million pounds over three seasons, according to analysts -- will boost Amazon Prime subscriptions heading into the Christmas trading season.

Almost three-quarters of new Amazon Prime subscribers tend to pay for a full year’s membership after a 30-day free trial, and 91% of first-year paid subscribers renew for a second year, according to estimates from Consumer Intelligence Research Partners.

When Amazon won the Premier League rights in 2018, it didn’t know how many viewers it would have to serve. The league said its U.K. audience grew 12% last season, when the title race was decided between Manchester City and Liverpool by just one point. The number of viewers has jumped again in the current season, according to Sky, with a Liverpool-Manchester City clash last month drawing 3.36 million viewers.

Traditional TV broadcasting can deal easily with big audiences because each additional viewer picks up the same airwave signal from a transmitter. With video-on-demand, each login needs a dedicated stream, even when everyone is watching the same image.

The streaming platforms need to work with content delivery companies such as Limelight and broadband providers including BT or Virgin Media, crunching live video into data packets, known as caches, that are distributed to the data centers and exchanges best placed to deliver them on to each end-user. Content providers decide on the best image quality they can provide while still avoiding network overloads.

The process means often the signal isn’t truly “live” -- delays of 20 to 30 seconds are seen as normal.

“One of the big challenges is not overwhelming all this infrastructure when the thundering herd of audience arrives at kickoff,” said Miller Jones of Limelight. “So you have to try to let them get the stream in an orderly way, so that they all get the best experience.”

To contact the editor responsible for this story: Rebecca Penty at rpenty@bloomberg.net