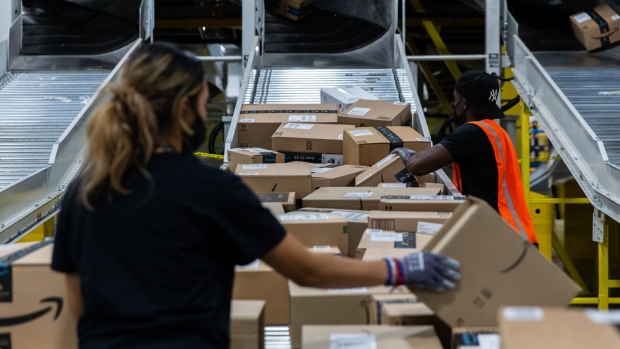 (Bloomberg) -- Amazon.com Inc. shoppers in the U.S. spent less per order during the first 32 hours of the annual Prime Day sale than the previous two years, according to Numerator, suggesting shoppers are flocking to the site to buy diapers and cereal rather than flat-screen televisions and laptops.

The results reflect a shift in consumer purchases during the sale from big-ticket electronics to everyday items. Electronics, which were the top category shopped last year, slipped to the fourth-most popular category this year behind household essentials, gardening supplies and apparel, Numerator said.

“Prime members are saving big and taking advantage of the widest selection of deals we’ve ever had on Prime Day,” an Amazon spokeswoman said in a statement. “In the U.S., there are hundreds of thousands of brand new deals available today for our members to shop and save, including deals from small businesses.”

Shoppers shifted more of their spending online during the pandemic when stores closed, making it harder for an online sale to stand out. Amazon also has competition from retailers such as Walmart Inc., Target Corp. and Best Buy Co. offering competing deals.

Shoppers reacted to all of the sales, but they didn’t go crazy. The average online order on Monday for U.S. shoppers on all sites was $180, up from $175 from the previous 20 days in June, according to the Adobe Digital Economy Index, which tracks overall online spending. That small boost was still enough to make Prime Day the biggest online shopping day so far this year, with U.S. consumers spending $5.6 billion, Adobe said.

Amazon started Prime Day in 2015 to attract new subscribers, who now pay as much as $119 a year for shipping discounts, video streaming and other perks. The event helps Amazon lock in shoppers before the holidays and deepen its relationship with existing customers by offering them deals on Amazon gadgets such as the Fire TV stick and smart speakers that run on the Alexa voice platform. Amazon brands are once again among the top sellers on Amazon Prime Day, according to Numerator.

Many third-party merchants who provide more than half of the products sold on Amazon said they couldn’t offer deep discounts on Amazon Prime Day this year due to scarce inventory and rising costs for shipping and advertising on the site.