Stock splits were all the rage early this year as indexes hovered near record highs, with companies from Amazon.com Inc. to Alphabet Inc. announcing them to make their share prices more alluring to individual investors. A few months on, the market has taken care of the problem.

Amazon, whose 20-for-1 split took effect Monday, is among companies whose stocks have tumbled since the moves were announced amid a broad market selloff that’s been especially painful for the technology sector. Shares of the e-commerce giant rose 2 per cent in New York after the split, but shares are still down about 10 per cent since reporting the plan in March. Alphabet, which announced a similar proposal in February, is down 17 per cent since then.

The selloff means the stocks will be trading at a discount to the sticker price originally envisioned by executives. That will make it easier for the behemoths to gain entry to the Dow Jones Industrial Average, whose weighting is based on share price, but it could have the effect of making them look less princely than their massive market values and history of big gains would imply.

Splits, of course, have no fundamental effect on share value -- they’re the stock market equivalent of exchanging a US$20 bill for two US$10s. But in the buoyant market of early 2022, they were met with bidding wars by giddy traders.

For companies like Shopify Inc. that have fared even worse than Amazon and Alphabet amid an exodus from stocks with the highest valuations, the splits could make them look downright pedestrian. If the 10-for-1 exchange plann by the Canadian e-commerce company was done today, it would result in a US share price of about US$35 following a 79 per cent crash from a November high when the stock closed at a record US$1,690.60. The median stock price in the S&P 500 Index, by contrast, is around US$113, according to data compiled by Bloomberg. Shopify’s split is set to take effect on June 29.

Of course, the sour market sentiment could cause companies like Tesla Inc. to rethink their plans. The electric-car maker said in late March it would ask investors this year to approve the creation of additional shares for the purposes of another split. The stock was trading above US$1,000 at the time.

Since then, the shares have lost nearly a third of their value, closing Friday at US$703.55, amid manufacturing problems in China and concerns about slowing growth. 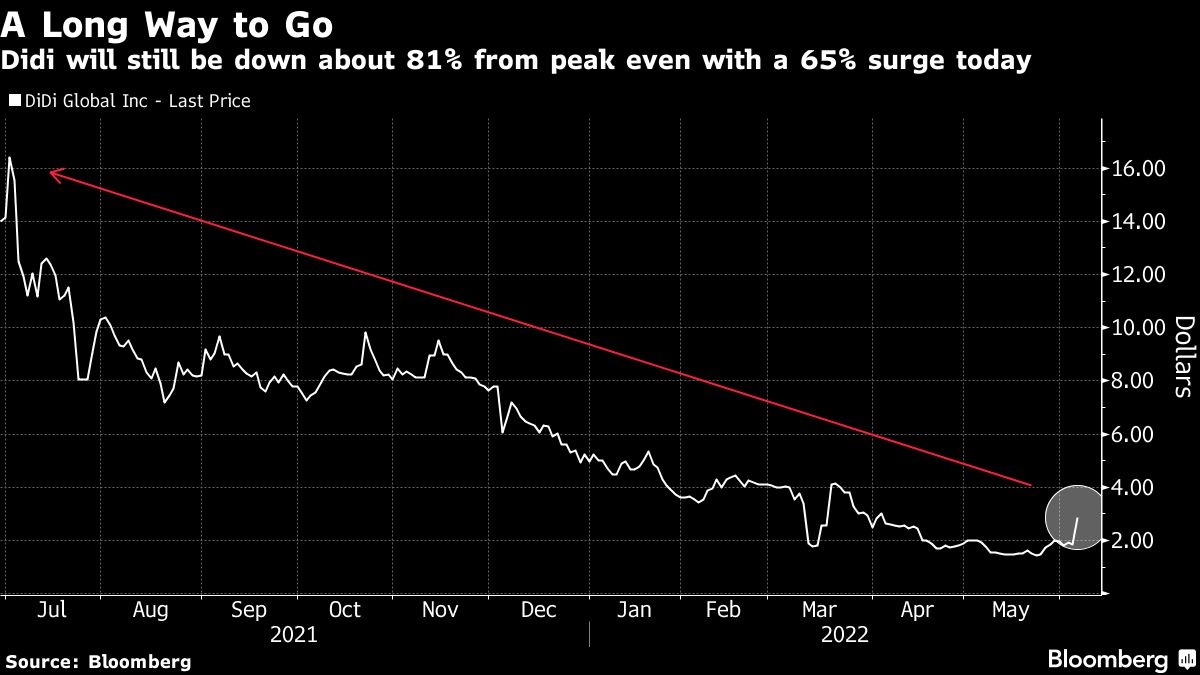 Didi Global Inc. shares surged 65 per cent on Monday after the Wall Street Journal reported that Chinese regulators are preparing to wrap up their investigation into the ride-hailing giant. Shares were trading at around US$3, still about 81 per cent below its US$16.40 peak close in July last year.

Through Friday’s close, Didi shares had sunk nearly 90 per cent from their peak, wiping off more than US$70 billion in market value, after its blockbuster US listing drew the wrath of Beijing and made it the face of the nation’s tech crackdown.