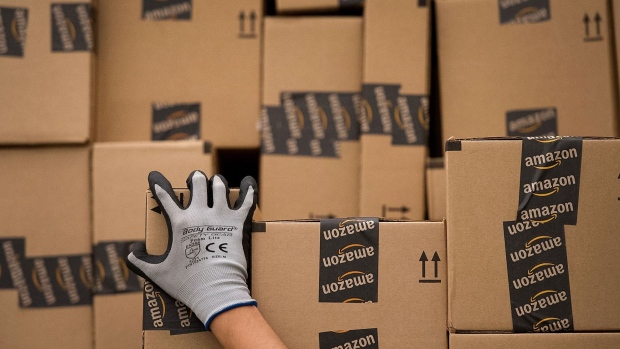 An employee loads a truck with boxes to be shipped at the Amazon.com Inc. distribution center in Phoenix, Arizona, U.S. , Bloomberg

Amazon.com Inc. says its returns warehouse in Kentucky where three workers tested positive for Covid-19 has been closed by the order of the state’s governor, and the online retailer aims to reopen the facility next week.

Amazon on Monday evening had informed employees of the Shepherdsville, Kentucky, warehouse that the facility would be closed for 48 hours for cleaning after it identified three workers sickened by the disease caused by the coronavirus. On Wednesday, hours before the warehouse -- called SDF9 -- was scheduled to reopen, Amazon told workers it would be idled until further notice for more cleaning, the first known case of Amazon shutting a U.S. facility due to the pandemic without a scheduled end date.

In an emailed statement on Thursday, Amazon said that the facility remains closed at the order of Kentucky Governor Andy Beshear. “At the order of the Governor the site is closed until April 1st,” the company said. “We will continue to work closely with health department and the Governor to reopen the site.”

An executive order taking effect Thursday evening requires all businesses in Kentucky to close unless they provide life-sustaining services, or meet certain other exceptions. Amazon, however, said SDF9 was closed by a separate order specific to the site. The governor’s office didn’t immediately return messages seeking comment.

Amazon is dealing with unprecedented strain on its logistics network. A surge in online orders from people hunkered down at home arrived just as some workers in its own buildings began to get sick or stay home out of fear. Many Amazon warehouses in the U.S. stock a wide variety of goods, and are capable of easily shifting their work toward in-demand items like toilet paper, diapers and dry goods. The company this month cut off restocking shipments of non-essential goods.

But SDF9, a former Zappos.com warehouse before Amazon acquired the footwear retailer, almost exclusively handles non-essential goods, workers say.. Instead, workers inspect, clean and restock returns of apparel and sneakers. Employees interviewed this week by Bloomberg said they worried about the risk of contracting or transmitting the virus in the service of processing used customer shipments. Some raised concerns with Amazon management and state officials that the company was putting workers at risk unnecessarily, according to two people who made such complaints.