Tech Earnings Will Continue to Be Attractive: Well Fargo's McMillion

Wall Street’s enthusiasm over Amazon was spurred by the tech giant’s earnings report Thursday afternoon, which showed strong performance in its cloud division, a huge boost in profit largely driven from an investment in Rivian Automotive Inc., and a price hike in its flagship Prime membership offering. The shares rose 14 per cent to US$3,152.79 at Friday’s close in New York, the best single-day advance since April 2015. The jump added about US$191 billion in market value, giving the online retail giant a market capitalization of just more than US$1.6 trillion.

The reaction from investors highlights the importance of Amazon’s diversification from its e-commerce roots. While online store sales actually declined from last year’s pandemic-fueled gains, Amazon’s profitable cloud-computing and advertising businesses combined to more than make up for it.

“Amazon has evolved into a true platform, as more than 50 per cent of its revenue now comes from areas outside of first-party retailing, such as cloud computing and advertising,” Deren Baker, chief executive officer of market research firm Edge by Ascential, said Thursday after the earnings report.

Amazon in October had warned investors it would spend billions in the holiday period to ensure packages got to customers amid supply-chain bottlenecks and an acute labor shortage. A lot of that spending went into hiring 140,000 workers -- just short of its goal of bringing on 150,000 recruits during the quarter. Amazon also lavished bonuses on workers, dispatched half-empty vehicles if it meant getting packages to customers on time and secured space on any ship it could find -- a spending spree that totaled US$22.4 billion.

The massive outlays helped reinforce the value of Prime membership with customers, giving the company confidence to raise the price by US$20 to US$139 a year -- the first such increase since 2018. Prime, which offers subscribers shipping discounts, video streaming and other perks, helps Amazon convert occasional shoppers into loyal customers. Prime subscribers typically spend more on Amazon than non-members.

“As expected over the holidays, we saw higher costs driven by labor supply shortages and inflationary pressures, and these issues persisted into the first quarter due to omicron,” CEO Andy Jassy said in the statement. “Despite these short-term challenges, we continue to feel optimistic and excited about the business as we emerge from the pandemic.” 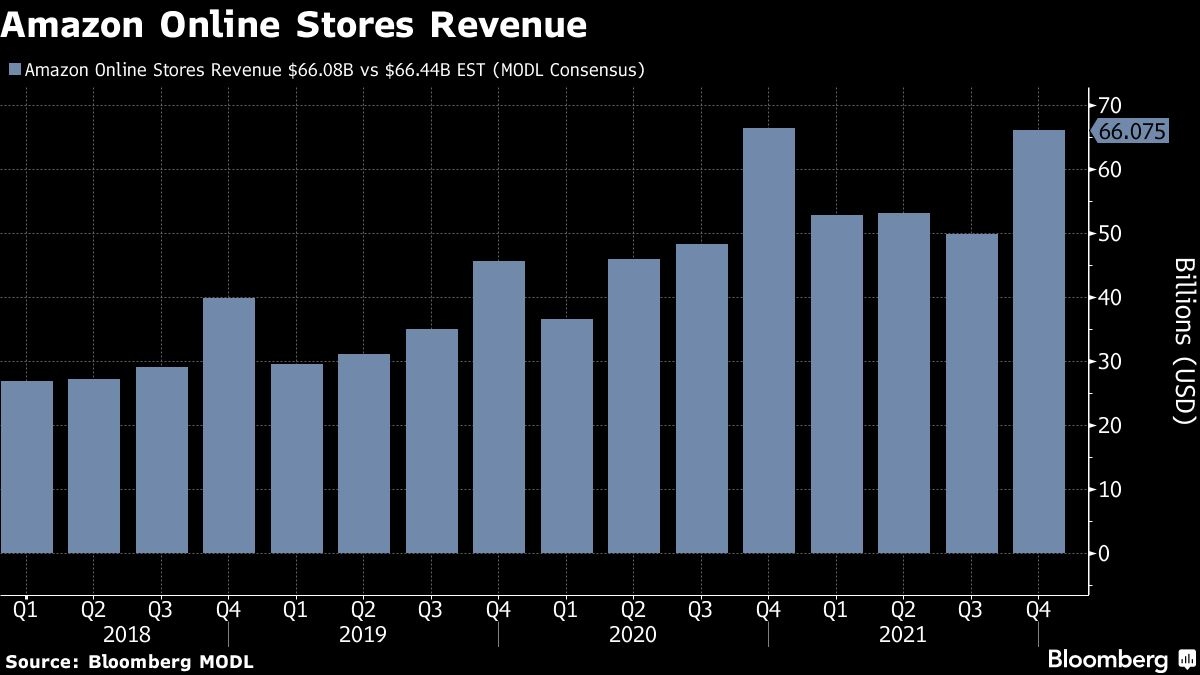 Fourth-quarter sales increased 9.4 per cent to US$137.4 billion, the Seattle-based company said Thursday in a statement. Profit was US$27.75 a share, aided largely by a pretax gain from the company’s investment in Rivian, which went public in November. Analysts, on average, projected revenue of US$137.8 billion and earnings of US$3.77 a share, according to data compiled by Bloomberg.

Amazon’s most profitable unit, the Amazon Web Services cloud-computing division, generated sales of US$17.8 billion, a 40 per cent year-over-year increase, and operating profit of US$5.29 billion, topping estimates. Advertising revenue was US$9.7 billion, a 32 per cent increase from a year earlier. It was the first time the company disclosed advertising as a separate line item. Previously it was part of the “other” revenue category.

“Every single drop of profit is being generated by the mushrooming Amazon Web Services cloud business,” said Sophie Lund-Yates, an equity analyst at Hargreaves Lansdown. “It’s hard not to admire the business model. However, no one should lose sight of the fact Amazon is supposed to be a retail giant, and it’s not the greatest look for the support act to be seen keeping profits afloat.”

In the period ending in March, Amazon projected revenue will be US$112 billion to US$117 billion. Operating profit will be as much as US$6 billion. Analysts, on average, estimated sales of US$120.5 billion and earnings of US$6.06 billion.