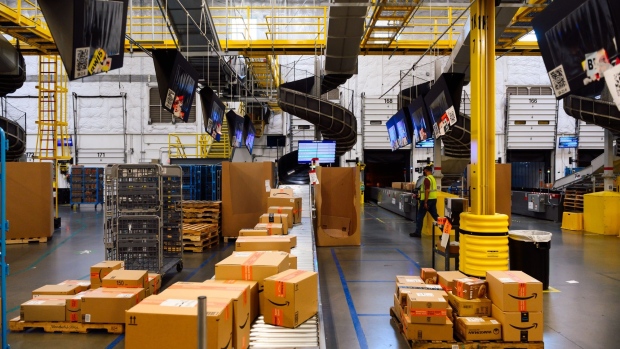 (Bloomberg) -- Amazon.com Inc. is suing the Washington State Department of Labor & Industries, escalating a clash over fines the regulator issued regarding safety practices in the company’s warehouses.

In a complaint filed in federal court in Seattle on Monday, Amazon asked a judge to set aside orders to remedy workplace hazards during the company’s appeal on the grounds that the state’s procedures for addressing workplace violations contravene due process protections in the US Constitution’s Fourteenth Amendment.

The company’s home state workplace safety regulator in March found that Amazon was “knowingly putting workers at risk” at a Kent, Washington, warehouse, called BFI4, and fined the company $60,000.

Owing to similar findings during previous inspections, the regulator declared the citation a willful violation, a more serious contention that imposes higher penalties and orders Amazon to move quickly to address the issues. It was the third Amazon warehouse Washington regulators had cited for injury risk in less than a year and coincided with mounting data showing Amazon warehouses have higher rates of injuries than other logistics employers.

Amazon denied the allegations and contested the fines, asking the regulator to stay its orders to abate the alleged hazards while an appeal was pending. The state’s Board of Industrial Insurance Appeals denied that request in August -- citing procedural violations by Amazon, including a failure to certify that the company had posted notices in its facilities informing workers of its appeal. Hearings on the citations had been scheduled to begin in January, before being postponed to summer 2023 after scheduling conflicts.

Fixing the alleged hazards would be “tremendously disruptive to Amazon’s operations,” requiring a redesign of the facilities to meet ergonomic standards that are not well defined by the state, the company said in its Monday complaint. “That lack of clarity affords the Department near limitless discretion to interfere in the details of company operations, all in the name of reducing unsubstantiated alleged hazard,” the company said.

“The safety of our employees is our top priority, and we disagree with these allegations and look forward to showing the facts as the legal process plays out,” Amazon spokesperson Maureen Lynch Vogel said in an emailed statement. “In this particular filing, we’re challenging an unusual state requirement that says we need to change our operations prior to a full and fair hearing on the merits, which we don’t believe is the right approach.”

Matt Ross, a spokesperson for the Washington State Department of Labor & Industries, said that office and the Washington State Attorney General’s office were reviewing the lawsuit, and didn’t immediately have further comment. The lawsuit was reported earlier by technology news site GeekWire.

The department had said in a March release it had provided Amazon “numerous options to reduce the risk of injuries,” including “installing height adjustable platforms to reduce awkward lifting, using powered equipment to move heavy pallets, and setting a safe pace of work for each process.”

The case is Amazon.com Services LLC v. Joel Sacks and the Department of Labor & Industries of the State of Washington, 22-cv-01404, US District Court, Western District of Washington (Seattle).