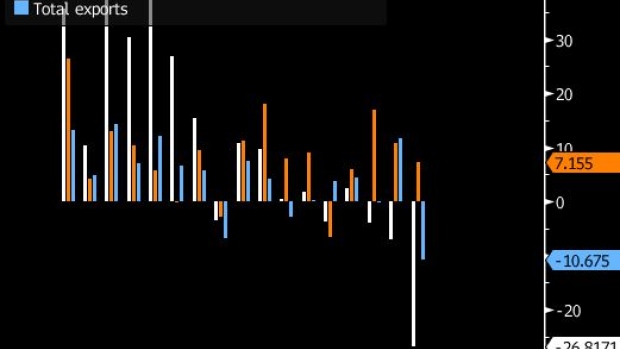 Investors are bracing for a significant downturn in the world economy, cutting earnings estimates amid a market sell-off. While all cyclical industries face some form of risks, some companies within each sector are more vulnerable than others as the outlook deteriorates.

In recent recessions, technology and finance were the triggers -- the internet bubble caused the 2000 market crash and subprime lending led to the 2008-2009 global financial crisis that spread to housing, manufacturing and consumer demand.

“The financial sector was leading in 2002-2007. In this cycle, it’s the tech sector,” said Bloomberg Chief Equity Strategist Gina Martin Adams. Still, she cautioned that in spite of the warning signs, it may be too early to predict a recession, adding that “tech is the strength of the economy.”

Here are five global companies that may stand to lose more than others:

Amazon.com Inc. is among the most cyclical U.S. internet companies because the Seattle-based e-commerce giant relies heavily on consumer spending. It’s also been building its employee base, adding more than 600,000 jobs and hundreds of huge warehouses to store and ship products. Some of those costs are fixed, while others may be hard to reduce quickly if there’s a steep economic decline. It also faces regulatory risks.

“Amazon’s near-term growth may be at risk as macroeconomic conditions worsen, regulatory scrutiny rises and spending cycles spark concern,” Jitendra Waral and April Kim, analysts at Bloomberg Intelligence, wrote in a recent note. “If demand were to slow amid Amazon’s increased spending on logistics, profit would face a double whammy.”

One of Amazon’s fastest-growing new businesses -- digital advertising -- is also susceptible to economic ups and downs. Still, Amazon is riding a broad e-commerce growth trend that is unlikely to reverse during a recession.

Makers of luxury items tend to endure more risks in a recession than producers of mass-market consumer goods. This time around, the effects would be compounded by U.S.-China trade tensions and protests in Hong Kong, which has already hurt the city’s economic outlook.

Swatch Group AG, the biggest maker of Swiss timepieces, has more exposure to Hong Kong than any other luxury company, generating more than a third of the group’s sales in the Greater China region, according to Kepler Cheuvreux analyst Jon Cox. The maker of Omega watches also has a smaller presence in the steadier luxury categories of jewelry and fashion than rival Richemont, which owns brands including Chloe, Van Cleef & Arpels and Cartier.

The high-end segment has also been far less elastic in a downturn. In 2009, Swiss watch exports slumped 22% amid the financial crisis.

So far, the economic slowdown in China has done little to damp the appetite of Chinese consumers for luxury goods. But watchmakers are feeling the effects of the sometimes violent demonstrations in Hong Kong, their largest export market. Timepiece sales there could plunge as much as 40% in the second half, Cox said.

Swatch also faces sluggish watch sales in Europe. If the U.S. takes a turn for the worse, the industry could be hit by a reversal of the recovery in its second-biggest market.

The German corporate giant just doesn’t just face a slowdown in its home market -- it also has substantial exposure to a potential downturn in the U.S. The automaker produces two high-margin SUVs in Alabama and its Freightliner division is the leader in the North American heavy-truck market. Demand for transportation of goods tends to closely mirror broader economic swings and analysts say heavy-truck sales in the region have peaked following years of robust growth.

Daimler AG relies on the U.S. for about a quarter of the group’s revenue last year. That’s more than Germany or China, where it operates a joint venture with BAIC.

After two back-to-back profit warnings following their debut in May, Daimler’s new leadership duo has vowed to improve efficiency. Profitability at the Mercedes-Benz passenger-car division has been sub-par compared with its peers, and the car unit is up against waning demand in its two biggest markets by volume: China and the U.S.

An economic downturn could be particularly ill-timed for Caesars Entertainment Corp. The largest owner of casinos in the U.S. is about to increase its debt load again to finance a megadeal, after struggling for years to recover from a 2008 leveraged buyout that left it saddled with debt at the height of the Great Recession. (Caesars ended up putting its largest division into bankruptcy to clean up its balance sheet.)

Caesars is set to merge with Eldorado Resorts Inc. early next year in a deal that involves $8.2 billion in new financing, amid rising competition from new casinos, both online and at its properties. Unlike some of its peers that focus more on luxury, such as Wynn Resorts Ltd., Caesars operates a lot of casinos in small markets including Tunica, Mississippi, and Metropolis, Illinois. Combined with Eldorado, it will have 60 owned, operated and managed casino–resorts across 16 states.

And even the Las Vegas Strip, once considered invincible as a gambling destination, has yet to see casino revenue return to its 2007 high.

A major economic slowdown would almost certainly hit home sales and prices for builders like Toll Brothers Inc. “If we do go into a recession, housing isn’t going to be the cause,” said Drew Reading, an analyst at Bloomberg Intelligence. “It’s going to be the victim.”

The bigger challenge for the industry right now is affordability, especially in high-cost metros on the West Coast. Toll Brothers, the largest U.S. luxury homebuilder, has been trying to diversify geographically. But it’s still highly reliant on California, where it got nearly a third of its revenue last year.

One the plus side: Single-family housing starts still haven’t returned to historical levels more than a decade after the financial crisis, which means homebuilders won’t be sitting on as much supply if the economy takes a turn for the worst.

To contact the reporter on this story: Cécile Daurat in Wilmington at cdaurat@bloomberg.net

To contact the editors responsible for this story: Crayton Harrison at tharrison5@bloomberg.net, Linus Chua, Steve Geimann