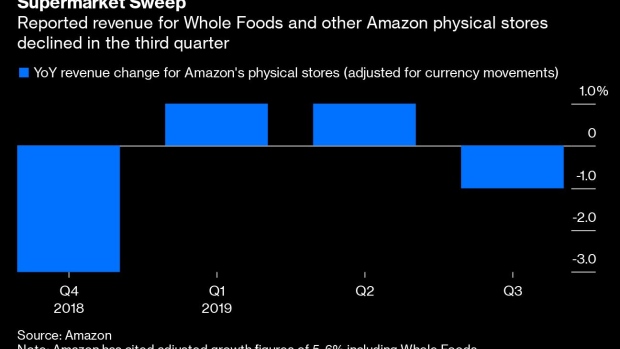 It's unclear whether the e-commerce giant has a novel or sensible idea on food shopping. , Photographer: Spencer Platt/Getty Images North America

(Bloomberg Opinion) -- Amazon.com Inc. loves to tinker and test. Sometimes projects that seemed like mindless fiddling — the Kindle e-reader, the Prime shopping club, its Amazon Web Services cloud-computing operation — turned out to be important advances for the company, its customers and the technology industry.

Despite that history, I have to ask: Does Amazon know what it’s doing in groceries?

When Amazon agreed to buy the Whole Foods supermarket chain for nearly $14 billion more than two years ago, it was regarded largely as a bold masterstroke. Groceries and other household goods are a magical category of consumer spending, with close to $1 trillion spent in the U.S. each year. The combination of large spending, the frequency of grocery shopping and its relative lack of e-commerce penetration has made groceries a prime (pun intended) target for Amazon, China’s Alibaba Group Holding Ltd. and other new economy giants.

So far, Amazon’s serious foray into groceries is marked by head-scratching tactics and middling financial and strategic performance. It’s still early in the supermarket era for Amazon, and it’s never wise to count the company out. Still, unlike Amazon’s history of wild experiments that became wild successes, the company doesn’t have the field of grocery innovation entirely to itself. And it remains unclear whether Amazon has a novel or sensible idea to take grocery shopping in a fresh direction.

For now, Amazon has a growing grocery sprawl. Customers can buy groceries and household goods from Amazon in a tangle of spots: its eponymous website; Prime Pantry, a separate shopping club for bulky household goods; the 12-year-old Amazon Fresh grocery delivery service that is expanding; Whole Foods and its separate and expanding delivery operation; the Prime Now delivery service for orders in some cities in one or two hours; Amazon’s couple dozen Go convenience stores without cashiers; a different supermarket chain that Amazon is starting from scratch; a couple of drive-in grocery pickup kiosks in the Seattle area; and — if you’re not exhausted yet reading this list— Bloomberg News reported Wednesday that Amazon wants to take the cashier-less Go technology into larger, supermarket-sized stores.

There may be a method to Amazon’s grocery madness. For now, it just looks like madness.

The company’s most established grocery operation, Fresh, has languished for years. Amazon has made sensible changes at the 500-store Whole Foods chain, but there have been few of the earth-shattering retail innovations that people expected or feared at the time of that acquisition. And Amazon, which has had patchy success with online shopping outside the U.S., has a largely parochial supermarket operation.

Investors barely press Amazon to explain its performance and strategy with Whole Foods and its other food initiatives, and Amazon has obliged by not saying much. Amazon’s limited financial disclosures are enough to make me wonder whether groceries sales at U.S. market leader Walmart are growing faster than those at Amazon’s relatively pipsqueak operation.

Amazon’s reported third-quarter revenue growth for its physical stores, which include Whole Foods, Go stores and Amazon’s collection of bookstores — declined 1% from a year earlier after adjustments for movements in foreign currencies. This growth figure excludes Whole Foods delivery orders or purchases made for pickup in stores — fast-growing categories of grocery spending.

The strategic and financial costs for Amazon’s grocery initiatives are enormous. Whole Foods was by far Amazon’s largest acquisition in its history. My Bloomberg News colleagues previously reported that Amazon has spent hundreds of millions of dollars on Go stores, and that may be a lowball figure. In Wednesday’s article, Bloomberg reported that some of the 1,000 or so people working on Go were recently told their cumulative salaries have totaled more than $1 billion since the project started in 2012.

A larger, suburban-sized grocery store is what Amazon originally imagined for its cashier-less Go stores before deciding that megamarkets were overly ambitious. The smaller-format Go stores certainly have received much attention — and they are the genuinely novel idea that Amazon hasn’t showed in its other physical store attempts. Still, it’s hard to call the Go stores a success so far, and Amazon has been less ambitious with their rollout than it planned initially.

The sophisticated technology behind shopping with as little human interaction as possible is a promising idea, and it could be licensed to non-Amazon supermarkets or other retail stores, as Amazon, Microsoft Corp. and other technology companies are trying. I do wonder whether retailers that compete with Amazon — essentially all retailers these days — will be willing to pay to use technology from a competitor.

Those fears, and the response by technology companies and grocers to Amazon’s push into food sales, are among the signs that Amazon may have less time to tinker than it did in the past. It’s the company that everyone else watches closely, to immediately imitate or respond to what it is doing. Amazon has a long leash from investors to figure out tactics that will give the company a crack at an enormous chunk of people’s wallets. The experience of shopping for groceries definitely could use fresh ideas and approaches. I’m just not convinced that Amazon has them.