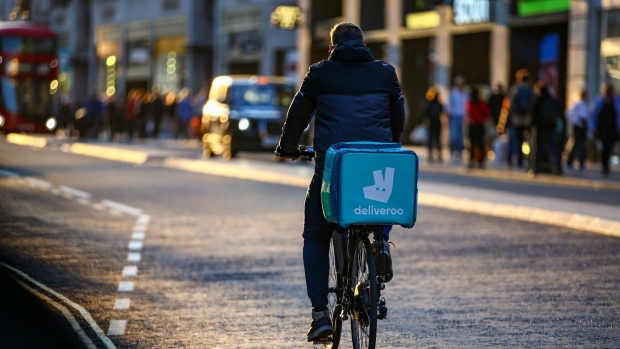 Amazon.com Inc. could raise as much as 107 million pounds (US$148 million) by selling some of its stake in Deliveroo Holdings Plc in the food-delivery startup’s London initial public offering.

Amazon will own 11.5 per cent of Deliveroo following its listing, down from the 15.8 per cent it holds now, according to the prospectus for the sale. That implies the retailer could sell as many as 23.3 million shares, which at 4.60 pounds each -- the top end of the range at which Deliveroo is marketing the stock -- would be worth 107 million pounds, according to Bloomberg calculations.

London-based Deliveroo started taking investor orders on Monday in the sale of as much as 1.77 billion pounds of stock. The company is looking to raise 1 billion pounds from the IPO, with the rest of the proceeds going to Amazon and other early investors.

Index Ventures, DST, Greenoak, Bridgepoint, Accel, are among the other investors selling down stakes in the IPO. Major U.S. fund companies Fidelity Investments and T. Rowe Price Group Inc. aren’t offering any shares in the offering, according to the prospectus.

“We congratulate Deliveroo on their IPO and can confirm that on completion of the IPO, Amazon will still own a large proportion of our pre-IPO minority stake,” a spokeswoman for Amazon said in an email.

Deliveroo Chief Executive Officer Will Shu plans to sell 6.7 million shares, a sliver of his existing holdings, valued at 30.8 million pounds at the top end of the price range.

Shu will hold 6.3 per cent of the company post listing, though the stake will carry 57.5 per cent of Deliveroo’s voting rights because he will be the sole owner of Class B shares, which carry 20 votes each, versus one vote each for Class A stock. On the third anniversary of the IPO, the Class B stock will automatically convert into Class A. Deliveroo is giving Shu voting control for three years to provide him with the stability to execute long-term plans, the company has said.

Such dual-class structures, which are common in the U.S. and let founders keep control even after an IPO, are the subject of debate in London at the moment. A U.K. government-backed report this month recommended allowing companies to use such a setup on the premium segment of the London Stock Exchange, where they’re currently not permitted.

Because of that prohibition, Deliveroo is listing on the LSE’s standard segment, making it ineligible for indexes such as FTSE 100 despite its expected market capitalization of as much as 8.8 billion pounds.

Embracing two classes of shares would help the LSE attract more fast-growing technology companies, many of which choose to list in the U.S. Corporate governance experts frown on the structure, saying it can weaken protections for minority shareholders.