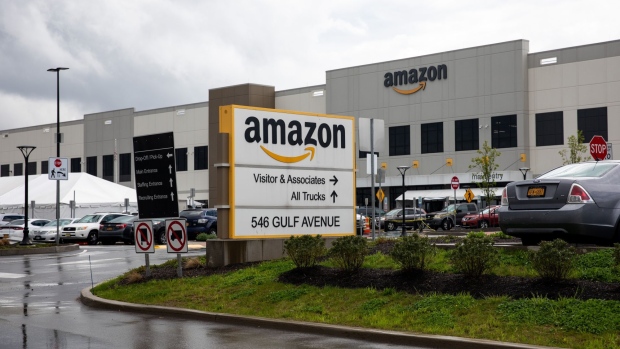 Signage is displayed outside the Amazon.com Inc. facility in the Staten Island borough of New York, U.S., on Friday, May 1, 2020. Workers at Amazon, Whole Foods, Instacart, Walmart, FedEx, Target, and Shipt said they would walk off the job to protest their employers' failure to provide basic protections for employees who are risking their lives at work. , Bloomberg

(Bloomberg) -- Amazon.com Inc. workers at a facility in Staten Island, New York, have collected enough signatures to hold an election on whether to join a union.

There is “sufficient showing” to proceed with a petition from the fledgling Amazon Labor Union, a National Labor Relations Board representative said in an email Wednesday.

The ALU filed the petition in December, after previously pulling an application because organizers hadn’t collected enough signatures from current workers. Under federal rules, labor organizers must sign up at least 30% of affected employees. The NLRB has scheduled a formal hearing on the latest petition for Feb. 16.

An election, should it be approved, would mark a new escalation in the battle between Amazon and organized labor. Last year, the company handily defeated an effort to unionize a facility in Bessemer, Alabama. But the labor board ordered a fresh election after the Retail, Wholesale and Department Store Union appealed the outcome, alleging Amazon intimidated workers -- which the company denies.

Chris Smalls, who leads the effort in New York, has notched a significant achievement despite lacking the money and organizing prowess of the national labor movement. Smalls worked at Amazon for more than four years before being fired in 2020 for what the company said was a violation of safety guidelines; Smalls said he was protesting Amazon’s inadequate Covid-19 policies. The dispute is part of an ongoing court battle between the company and New York’s attorney general.