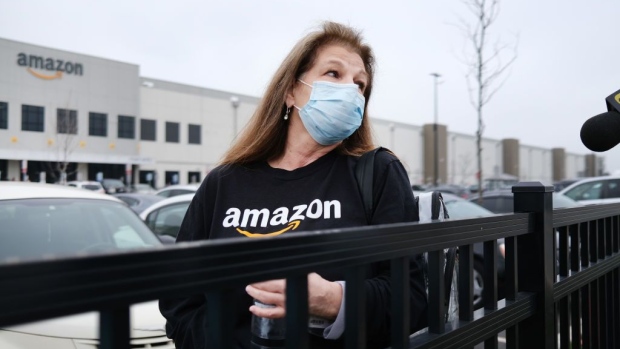 A group of Amazon.com Inc. warehouse employees sued the online retail giant, claiming its working conditions put not only them at risk of contracting the coronavirus but also their family members, including one who died.

Barbara Chandler, one of three workers who filed a lawsuit Wednesday in New York, claims she contracted the virus in March at Amazon’s Staten Island distribution center, where employees “were explicitly or implicitly encouraged to continue attending work and prevented from adequately washing their hands or sanitizing their workstations.” Within a month, Chandler’s cousin, whom she lived with, died after experiencing COVID-19 symptoms, the lawsuit says.

The suggestion that working conditions at the facility contributed to a specific third-party death distinguishes Wednesday’s lawsuit from other coronavirus-related complaints filed against Amazon in recent months.

But the plaintiffs, who accuse Amazon of violating public nuisance and employee safety laws by providing workers misinformation, setting “oppressive and dangerous” hourly quotas and discipline policies, are not seeking damages for illness or death. The lawsuit, which was jointly filed with advocacy groups including Towards Justice, Public Justice and Make the Road New York, is instead mainly asking for an injunction requiring the company to adhere to public health guidance.

Amazon didn’t immediately respond to a request for comment on the lawsuit.

Amazon emerged as an indispensable service for many customers shopping online during “shelter-in-place” orders. The company scrambled to meet surging demand by hiring 175,000 workers while simultaneously announcing new procedures to protect its workforce.

According to Amazon, over 150 processes have been updated to protect employees, and the company is spending over US$800 million in the first half of 2020 on coronavirus safety measures. Workers diagnosed with the virus are also being offered additional paid time off, the company has said.

But Wednesday’s lawsuit claims Amazon has only “sought to create a facade of compliance” and continued with unsafe practices. Workers “continue to work at dizzying speeds, even if doing so prevents them from socially distancing, washing their hands, and sanitizing their work spaces,” according to the lawsuit. The plaintiffs also say Amazon punishes employees who complain about workplace safety and tells workers to avoid informing others if they become infected. Amazon has told employees its contact tracing consists only of reviewing its surveillance footage, rather than interviewing infected workers about their interactions, the lawsuit says.

“Amazon’s failures have already caused injury and death to workers and family members of workers,” the lawsuit says, noting that a worker at the Staten Island warehouse has been confirmed to have died from COVID-19.

The Staten Island warehouse has been a focus of health and safety complaints since March, when employees mounted the first of a series of walkouts. Amazon terminated the leader of the walkouts, claiming he violated a company quarantine order. That action spurred denunciations and calls for investigation by officials including Senator Bernie Sanders and New York Attorney General Letitia James.