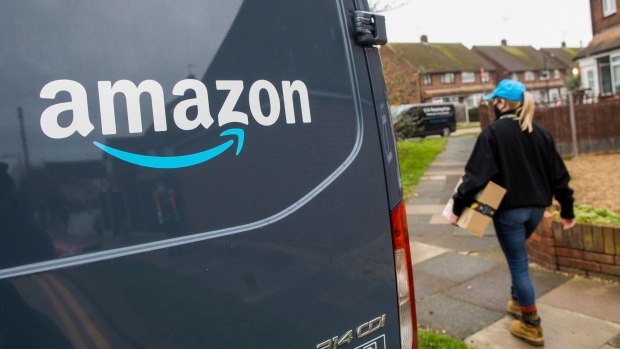 An Amazon.com Inc. delivery driver carries a customer order on a residential street in Westcliff-on-Sea, U.K., on Thursday, Nov. 26, 2020. With Black Friday almost underway, equity traders are bracing for a holiday season where brick-and-mortar businesses that lack strong digital platforms could suffer. , Bloomberg

(Bloomberg) -- Hundreds of Amazon.com Inc.’s UK workers are planning walkouts in the coming days after logistics workers clashed with managers over pay.

A series of walkouts and slowdown protests at at least seven facilities in Essex, Coventry, Bristol, Swindon, Chesterfield, Warrington and Rugeley last week are expected to be followed by further protests over the coming days, according to warehouse workers and the GMB union, which represents some of the Amazon employees.

Hundreds of Amazon workers on social media and in private messaging groups on WhatsApp and Telegram are calling for further protests and work stoppages this week at multiple sites, and for their hourly wage to rise to £15, according to messages seen by Bloomberg.

Amazon has faced periodic walkouts at some US facilities since the start of the pandemic, sometimes with the backing or assistance of labor or workers’ rights groups. The protests have tended to be small in size and participants say they’re seeking higher pay, a break from onerous productivity goals, and safer working conditions, among other demands.

“This is bigger than anything that has happened before, no doubt,” said the GMB’s Steve Garelick, a regional organizer, in an interview. “I don’t care what the profits are as long as people get paid a fair wage for what they do in the recession we are in.”

In the UK, Amazon has so far given workers pay rise of between 35 pence and 50 pence per hour depending on location and tenure. That’s during a cost of living crisis when inflation is expected to hit 13%.

An Amazon spokesman said that minimum wage would increase to between £10.50 and £11.45 per hour, depending on location and that workers are also offered benefits including private medical insurance, life insurance, income protection, subsidized meals and employee discounts, which “combined are worth thousands annually,” as well as a company pension plan. Amazon has about 20 warehouses and employs 70,000 people in the UK, the spokesman said.

Since the pay rise was announced last week, workers have continued to engage in work stoppages. At a fulfillment center in Swindon, UK, about 150-to-200 workers left their stations to sit in the canteen for several hours on Monday night, according to workers who spoke to Bloomberg, who asked not to be identified because they aren’t allowed to talk to the media.

Managers struggled to get protesters back to work and at one point the general manager compared the group to “animals.” The incident was captured on a smartphone video, seen by Bloomberg.

“This was a poor choice of words and we apologize for any offense caused by one of our site managers,” said an Amazon spokesman.