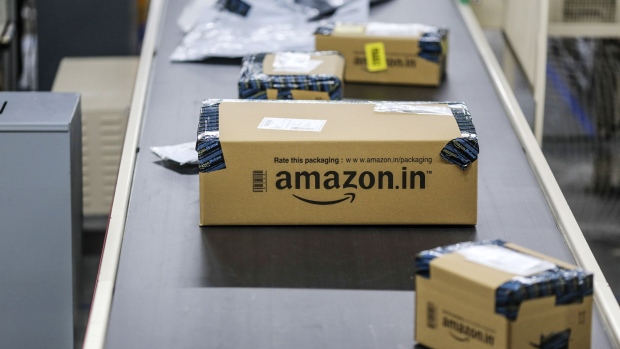 Packages move along a conveyor belt at the Amazon.com Inc. fulfillment center in Hyderabad, India. , Bloomberg

(Bloomberg) -- Amazon.com Inc. and Walmart Inc.’s Flipkart have agreed to compel merchants to start prominently displaying “country of origin“ for all goods sold online in India, bowing to regulatory demands as tensions with China escalate.

The internet giants joined about a dozen other online retailers including Facebook Inc.-backed Jio Platforms in agreeing to the move, widely regarded as a move to single out goods from China after a deadly border clash stoked long-simmering tensions. It’s unclear when the labeling will kick off, because the e-commerce companies have asked for more time to incorporate the new requirement into their technology, people familiar with the matter said.The commerce ministry’s Department for Promotion of Industry and Internal Trade summoned the online retailers to a videoconference meeting on Wednesday, giving them just a day’s notice, the people said, asking not to be identified discussing a private affair. A commerce ministry spokesman did not immediately respond to an e-mail seeking comment. An e-mail sent to spokespersons at Reliance Industries Ltd., Amazon and Flipkart remained unanswered.

If carried out, the labeling is likely to hurt sales of Chinese goods. Anti-China sentiment has erupted since a tense diplomatic and military standoff over a clash in the Himalayas last week that claimed the lives of 20 soldiers. Boycott China slogans have begun trending on social media and furiously circulating among messaging groups. The bulk of the smartphone brands sold in India are Chinese or are made in China, and these account for a huge portion of online revenues for the biggest online retailers. Electronic accessories, home appliances and apparel made in the neighboring country’s giant factories also make up a substantial portion of sales on India’s online websites.The Confederation of All India Traders, a lobbying group, said it’s appealed to top industrialists like Reliance Industries Ltd. Chairman Mukesh Ambani -- Asia’s richest person -- Kumar Mangalam Birla of Aditya Birla Group and Ajay Piramal to support a campaign to shun Chinese goods.Narendra Modi’s administration has signaled its support in other ways. Earlier this week, the government mandated country of origin information on its massive Government e-Marketplace (GeM) for all government purchases. A Made in India filter has also been enabled on the platform, the Ministry of Commerce said in a note on Tuesday.