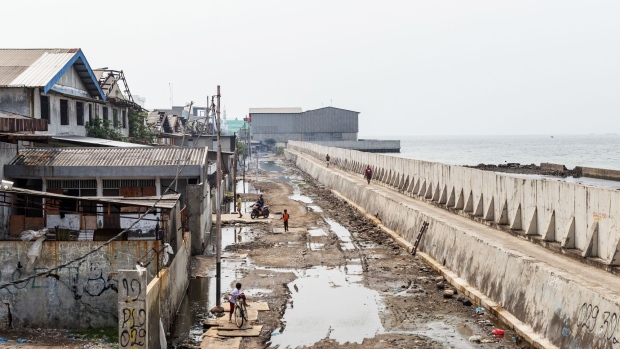 (Bloomberg) -- With its gleaming offices, electric buses and economically productive residents, Nusantara is the quintessential modern metropolis—smack in the middle of a vast rainforest.

At least, that’s what the government brochures depict. What they don’t show quite so clearly is where Indonesia will find $34 billion to build a new capital city from scratch.

With just 18 months left in his final term, President Joko Widodo is still aggressively courting international investors to finance 80% of a project that he hopes will elevate Indonesia’s economy, resettle millions of people from rapidly sinking Jakarta—and cement his own legacy. Hosting this year’s Group of 20 summit was just the latest opportunity for the president, popularly known as Jokowi, to pitch the ambitious project.

But more than three years after Nusantara was first announced, not one foreign party—state-backed or private—has entered into a binding contract to fund the project, according to people familiar with the matter. While some potential investors have signed letters of intent, the people said, there’s no firm commitment to actual spending.

Jokowi is determined to see the project through, but the situation has left him impatient and worried, said the people, who declined to be named as discussions are private. When asked for comments, the president’s spokesperson referred to a speech on Dec. 2, where Jokowi said that interest in investing in the new capital’s core area was 25 times oversubscribed. However, the speech didn’t specify whether binding contracts have been signed.

Indonesia needs a way to safeguard its economic growth. But without significant investment, the president’s vision will fall apart.

“Foreign investors are super cautious as the project is still at the initial stage,” said Dedi Dinarto, lead Indonesia analyst at strategic business advisory firm Global Counsel. Years of delays due to the Covid-19 pandemic have left potential backers hesitant to commit to the passion project of a president who will be out of office long before a new city could ever be completed.

Much of the early development work has focused on preliminaries like roads and bridges, Dinarto added, and “investors may still be uncertain about how they can make profits from investing in such basic infrastructure.”

Even if construction goes smoothly, any rewards for investors will be at least as long in coming.

“Many countries are either facing recession or are already in recession because of the global economic slowdown,” said Jakarta-based David Sumual, PT Bank Central Asia’s chief economist. For the next couple of years, he pointed out, even the richest countries are likely to “prioritize their own domestic agenda.”

Indonesia must also battle its long-standing reputation as an economic underachiever. Despite abundant supplies of coal, metals, palm oil and rubber, the Southeast Asian nation’s growth rate—averaging 4.3% over the past decade—lags behind neighbors like Vietnam and the Philippines. Corruption, cronyism and a slow-moving bureaucracy have all been blamed for the nation’s repeated failure to meet its lofty targets.

Jokowi’s careful diplomacy and good humor at last month’s G-20, which ended with a joint statement that seemed improbable only days before, earned him huge plaudits. While his success in building Indonesia’s profile on the world stage has yielded investments in areas like clean energy, it has had limited impact so far on this key domestic project.

The Indonesian president has ordered his cabinet to complete existing infrastructure projects by 2024, and to prioritize permits for strategically important efforts like Nusantara.

However, critics fear the new capital faces a similar fate to the country’s Mass Rapid Transit project, which faced almost 30 years of delays due to land acquisition issues and funding constraints. A similar slate of problems means a vast hydropower project in Borneo’s jungle, launched eight years ago, is yet to see a single dam built.

And while the government always planned to pay for the first of Nusantara’s five construction phases itself, state resources have been stretched by ongoing costs like education and the fight against rising inflation. Funding for the rest, meanwhile, remains elusive.

Jokowi has practical reasons, as well as symbolic ones, for building a new capital.

Spread across Java island’s northwest coast, the city of Jakarta—home to more than 10.6 million people and 16.5% of Indonesia’s gross domestic product as of the third quarter this year—is overcrowded, polluted and sinking so fast that one-third of it will be submerged by 2050 if left unchecked. Poor urban planning and decades of pumping groundwater from under the city have left it vulnerable to severe flooding that will only worsen as the climate warms.

Moving Indonesia’s administrative center to Borneo island, about 800 miles further northeast, is a response to that impending crisis.

Indonesia hopes to move up to 1.9 million people to Nusantara by 2045, with some civil servants moving as early as 2024 if all goes to plan. Thinning out the crowd in Jakarta should relieve the pressure on resources and allow that city to continue to operate as the country’s business hub, according to the government.  In theory, it could also help spread the nation’s wealth more evenly among its more than 275 million citizens. Indonesia has one of the world’s highest rates of extreme poverty and much of its wealth is concentrated in Java.

Nusantara “is not only a symbol of our nation’s identity, but also represents our nation’s development,” Jokowi said in August 2019, when he announced the site of the new city. “It’s for the sake of realizing an equitable and just economy.”

It’s also intended to help propel the former Dutch colony to high-income status by 2045, the centenary of declaring its independence. By then, the government hopes Nusantara will host more than 4.8 million jobs in sectors like technology, petrochemicals and renewable energy.

For the president himself, Nusantara is a chance to make history.

“Moving the capital was an old idea since the first president, Sukarno. I am the one who is executing this,” Jokowi said in an August interview with Bloomberg’s Editor-in-Chief, John Micklethwait.

“I’m confident this is a good concept with a good return on investment,” he added. “I am sure many investors will come in.”

Deep in the eastern part of Borneo’s jungle, a sign in Bahasa Indonesia marks out “Point Zero Nusantara.” Access roads have been created and some land has been cleared. A local contractor has been hired to construct the presidential palace, where Jokowi intends to celebrate the 79th anniversary of Indonesian independence on Aug. 17, 2024.

Jokowi said last month that building work on the palace and other government buildings will begin in December. A dam is also due to be completed in January. But there’s skepticism as to whether there is funding to cover this work.

“The real challenge is now how to find money to realize the artistic impressions,” said Melinda Martinus, lead researcher for socio-cultural affairs at the ISEAS-Yusof Ishak Institute, a Singapore-based think tank.

“It is a long-term project. We definitely won’t see what has been put on the masterplan rendering anytime soon.”

But when Covid arrived, all sorts of moonshot projects—not just Nusantara—were swept off most investors’ radars.

Nusantara’s challenges got more serious in March this year, when SoftBank announced it would not be financing the project. While no firm timeline was ever set for fundraising, it sent jitters through the Japanese investment community. In October, the Japan Overseas Infrastructure Investment Corporation for Transport and Urban Development also pulled out, according to people familiar with the situation. The agency and SoftBank both declined to comment.

As Japanese investors backed away, Jokowi toured the globe seeking investment in his signature project.

The United Arab Emirates government has said it will invest in the new capital through an existing $10 billion commitment to the country’s state wealth fund, although no binding contract regarding Nusantara has been signed. The UAE’s foreign ministry did not immediately reply to a request for comment. Similarly, while Jokowi secured $11.9 billion in funding from Japan and South Korea during visits in July, no specific sum has been earmarked for the new capital.

There’s been little direct discussion with the Chinese government, people familiar with the situation said.

Perhaps that’s not surprising. While China and Hong Kong have  invested some $40 billion in the Southeast Asian country over the past five years, Indonesia is wary of being seen as choosing sides in China’s rivalry with the US—which has invested $9 billion in the country since 2017. Negative public sentiment towards China is on the rise in Indonesia, according to polling by Lembaga Survei Indonesia.

Neither Indonesia’s Ministry for Public Works and Housing nor the Nusantara National Capital Authority—tasked with overseeing the project's development—responded to requests for comment.

A handful of firms in countries including China, South Korea, Malaysia and the United Arab Emirates have signed letters of intent, one person familiar with the matter said. However, those documents aren’t binding and the firms can still back out. The Korea Land and Housing Corporation said in a statement it is among those firms, and that several Korean government agencies are in talks over construction of a housing complex for government workers. The Asian Development Bank has offered assistance with planning and fundraising, but not direct investment.

None of this means the new capital won’t happen.

In January, Indonesia passed a law paving the way for relocating its seat of government to Borneo.

“There is relatively broad political support for the idea,” said Peter Mumford, Southeast Asia practice head at Eurasia Group. “The question is less whether it goes ahead or not—seems it will—but rather how fast and what the level of ambition is.”

The plan is to offer companies 30 years of tax relief and other incentives to relocate. Nusantara residents may also pay lower income tax, although the final say on that—as well as most of the migration task—will fall on Jokowi’s successor.

Should the president get his move right, the benefits for Indonesia—and Jokowi himself—will be significant.

But the reality of Nusantara is likely to be a long way from his near-term, high-tech vision.

“I was surprised the government went through with the project given the economic battering the country took due to the pandemic,” said Jamie Davidson, an associate professor from the National University of Singapore’s political science department who has written about the politics of infrastructure development in Indonesia.

“Imagine going forward if every Indonesian president feels like he or she needs to leave a legacy like this one behind. It’s like setting money on fire.”