The meme-stock frenzy is back -- and bigger than ever.

On Wednesday, shares of AMC Entertainment Holdings Inc. skyrocketed to an all-time high in a wild trading session as the Reddit retail-trading army came back in force, leaving many Wall Street pros wondering, yet again, what on Earth has become of the U.S. stock market.

The money-losing movie-theater rose 95 per cent and closed at a record high at US$62.55. At one point the stock rose as much as 127 per cent, pushing its total gains for the year to 3,000 per cent as its market value briefly soared past the US$33 billion mark.

In many ways, the surge in AMC echoed the meme-stock mania at the start of the year, when retail traders made household names out seemingly dead-end companies like GameStop and terms like “stonks,” “diamond hands” and “to the moon” entered the financial lexicon.

For those who’ve argued this crowd was going to slowly exit the market as the pandemic wound down and offices reopened, the rally was even more confounding. It leaves investors in AMC with shareholder equity that’s negative by more than US$5 a share, after the company’s US$5 billion debt is factored in.

“It is clear that fundamentals don’t support common stock levels at all (which makes sense for the Reddit crowd),” Mark Levin of Asterisk Advisors said in a note.

Just a few short months ago, AMC was on the brink of bankruptcy as the pandemic shuttered cinemas across the U.S. Its market capitalization stood at just US$216.8 million in April of last year. Even after the brief surge in January, many professional investors still pooh-poohed the idea that anyone on Reddit’s WallStreetBets forum could be taken seriously, much less move the market in a sustainable way.

“This is getting ridiculous,” said Edward Moya, senior market analyst at Oanda Corp., in a message. “It is not just AMC,” he said referring to other meme stocks.

Earlier on Wednesday, AMC announced that it will reward the small-time supporters with goodies such as special screenings and free popcorn. One day earlier, the company took advantage of meteoric gains to raise US$230 million directly from one of its main creditors, Mudrick Capital Management, and shore up its finances.

While Mudrick quickly dumped its entire stake for a tidy profit and called the company massively overvalued, the Reddit retail-trading crowd was having none of it.

“Many of our investors have demonstrated support and confidence in AMC...After all, these people are the owners of AMC, and I work for them,” Adam Aron, AMC’s chief executive officer, said in a statement Wednesday.

More than 3.2 million individuals owned a stake in AMC as of March 11, accounting for over 80 per cent of its investor base, according to the statement. Early last month, Aron spoke directly to many of these new investors during AMC’s quarterly conference call, cheering their passion, commitment and enthusiasm.

He then urged the skeptical stock analysts to pay attention to these investors -- “read what these people write,” he told them. 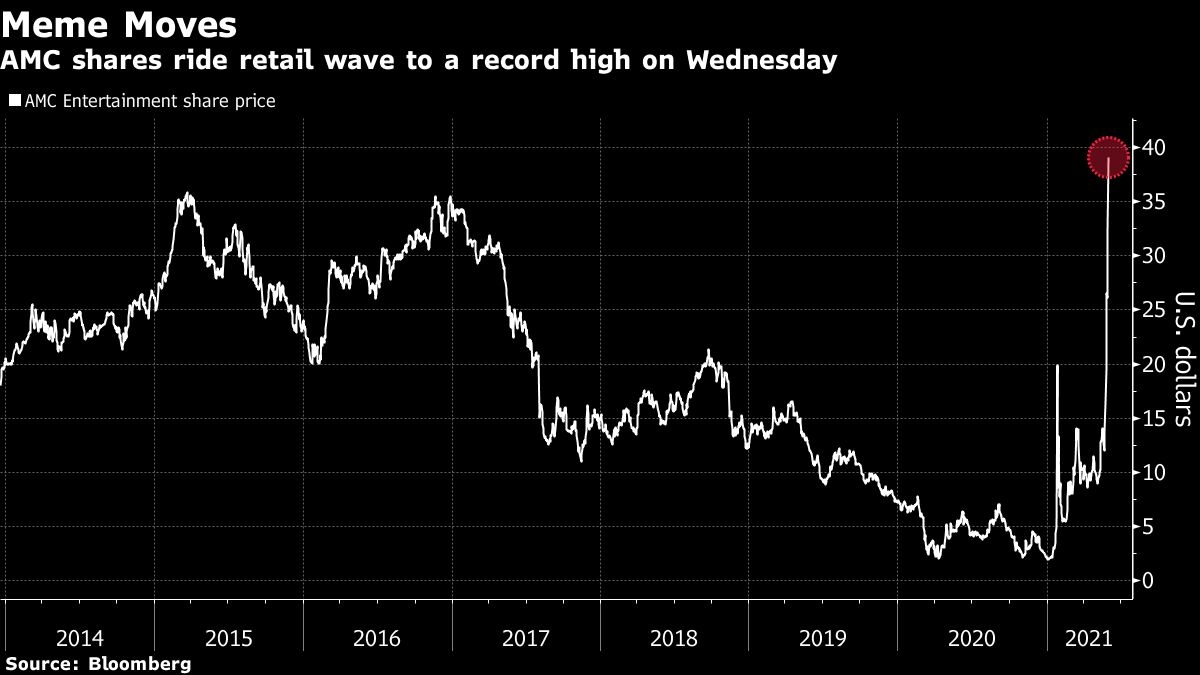 Few, if any, other top executives in America, have welcomed the newfound influence of the retail set like Aron has. Then again, few companies owe as much to them either.

Some savvy investors like Mudrick saw the huge share rally as a unique opportunity to turn a quick profit.

Raising cash through an equity sale to a single holder is relatively rare in U.S. markets. Having the holder flip the stock right after buying it is almost unheard of. In this case, Mudrick’s role in the AMC offering bears a passing resemblance to underwriters in a public offering who purchase shares with the specific intent of reselling them to investors.

A representative for Mudrick declined to comment, and AMC, based in Leawood, Kansas, didn’t respond to requests for comment.

In a statement disclosing the offering, Aron said the deal with Mudrick “will allow us to be aggressive in going after the most valuable theater assets, as well as to make other strategic investments in our business and to pursue deleveraging opportunities.”