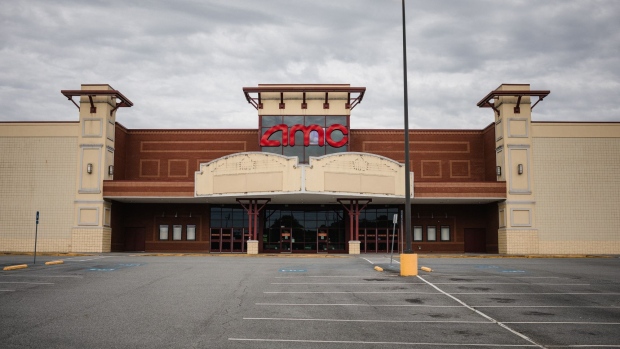 The AMC Classic Cartersville 12 movie theater stands temporarily closed in Cartersville, Georgia, U.S., on Wednesday, April 22, 2020. Georgia is reopening for business more aggressively than any state in the U.S., after being one the last to order a statewide shutdown. Photographer: Dustin Chambers/Bloomberg , Bloomberg

AMC Entertainment Holdings Inc., the world’s largest cinema chain, agreed to sell as many as 15 million shares of its stock while warning investors that it may need to file for bankruptcy, leaving its equity worthless.

AMC, contending with a liquidity crisis that threatens its ability to remain a going concern, said the equity distribution plan might not be enough. With US$417.9 million in cash on hand, the company still needs a material amount of new funding by the end of the year to stay in business, it said in a filing Tuesday.

If AMC is unable to raise enough cash to meet its obligations, the company said it would file for bankruptcy or seek an out-of-court restructuring of its debts.

The company’s shares fell as much as 12 per cent in volatile premarket trading and were down 10 per cent to US$3.18 at 8:41 a.m. in New York. The stock is down 51 per cent this year through Monday’s close.

A Chapter 11 bankruptcy gives a company the ability to stay in business while it reworks its borrowings, negotiates rent reductions and closes underperforming locations. In the event of a liquidation or bankruptcy, AMC’s shareholders would likely suffer a total loss of their investment, the company said.

Bloomberg News reported last week, citing people with knowledge of the matter, that AMC was considering a range of options that include a potential bankruptcy to ease its debt load. Lenders to the Leawood, Kansas-based cinema chain held preliminary talks among themselves about providing it with financing if it decides to file for Chapter 11 court protection.

AMC and other movie-theater owners have been trapped in a tough situation since the coronavirus pandemic forced auditoriums to close in the spring. While many locations have reopened, capacity restrictions and audience skittishness have deeply hurt revenue.

Even where cinemas are open, there are few major draws to put on their screens. Film studios have moved most of their big releases to 2021 and beyond, not wanting to dump high-cost movies into a constrained market.

The industry got a boost Monday when New York state set the reopening of theaters outside New York City. The continued absence of cinemas in that city and Los Angeles has been a particular burden on movie chains, and the step raised hopes that the New York City market would follow soon.

Besides the equity distribution plan, AMC reported preliminary third-quarter revenue of US$119.5 million, below analysts’ consensus estimate of US$163 million as compiled by Bloomberg.