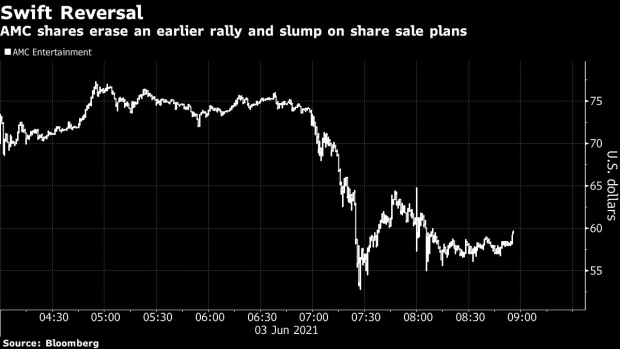 (Bloomberg) -- AMC Entertainment Holdings Inc. is cashing in on its wild stock rally by selling more shares, a move that could raise hundreds of millions of dollars for a cinema chain that was staring at potential bankruptcy only a few months ago.

AMC fell 17% at the open to $51.83, after fluctuating in premarket trading. The company said it plans to sell up to 11.55 million shares at market prices to repay debt and finance future acquisitions. Even at that price, AMC could take in nearly $600 million.

“It would be irresponsible for the board and management to not do a raise to secure the balance sheet at these levels,” said Greg Taylor, chief investment officer at Purpose Investments.

Thursday’s filing for the potential sale comes two days after AMC sold 8.5 million shares to Mudrick Capital for $230.5 million. Those shares were then flipped and sold for a profit as the New York-based investment firm told clients AMC’s stock was overvalued.

The company is warning investors that they could see their stakes diluted -- a prospect that helped kill AMC’s previous attempt at a much bigger sale earlier this year -- or even lose their entire investment.

The filing allows for shares to be sold at-the-market, which is unlike a traditional stock offering because the buyers are found in the open market where retail traders thrive. Stocks sold in traditional offerings are purchased mostly by institutional investors. B. Riley will handle the transaction.

A frenzied rally on AMC shares has pushed shares in the money-losing stock up about 3,000% this year and left it with a market capitalization of $31.3 billion, making it more valuable than half of the companies in the S&P 500 Index.

AMC sought earlier this year to authorize the sale of 500 million new shares, but withdrew the plan in April amid objections from shareholders worried about dilution. Still, the company said at the time it was likely to revisit the idea “at some point in the future.”

Back then, the stock was selling for less than $12. At today’s prices, a similar offering could wipe out the company’s entire debt load and leave billions more to fund AMC’s turnaround.

A successful equity offering “would be a massive first step in deleveraging the AMC capital structure,” CreditSights analysts Matt Zloto and Hunter Martin said in a note Thursday.

The company “highlights first and foremost in their disclosures that the proceeds would be used for debt reduction, a change from recent disclosures which focused on acquisitions,” they add.