Over 80% of AMC shareholders are retail investors: AMC analyst

The biggest holding in Direxion’s new budget-stock fund is one of the most famously expensive shares in the country.

A quirk of indexing means AMC Entertainment Holdings -- currently pricier than about 90 per cent of S&P 500 members -- has yet to exit the gauge of cheap shares tracked by the exchange-traded fund.

As a result, the movie-theater operator and Reddit favorite accounts for almost 7 per cent of the Direxion Low Priced Stock ETF (ticker LOPX) in its first day of trading on Thursday. While the product targets companies with a share price between US$2 and US$5, AMC closed Wednesday at US$40.78. 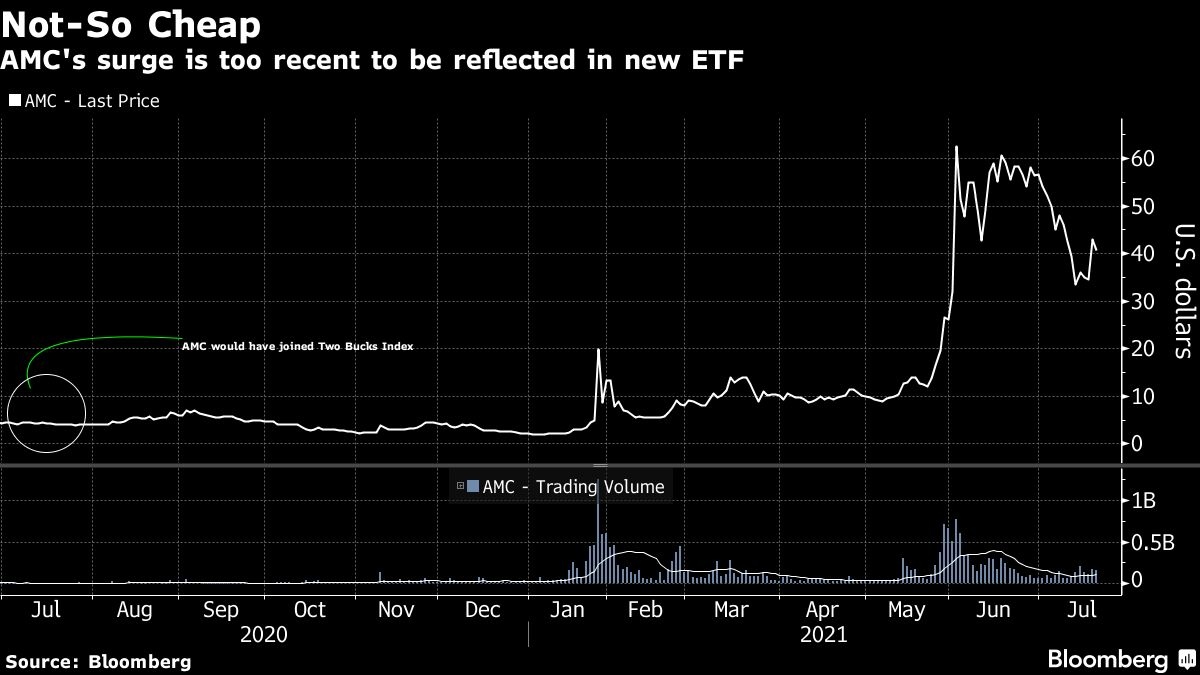 The paradox is the latest headache spurred by Wall Street’s unprecedented indexing boom. As more cash tracks benchmarks, and market swings turn extreme, these slow-moving instruments can leave investors exposed to companies that no longer reflect their aims. Most indexes rebalance every quarter or semi-annually.

In the case of LOPX, which follows the Solactive Two Bucks Index, the next quarterly rebalance is due in August, at which time AMC will almost certainly be dropped.

“We’re going to sell it,” Dave Mazza, head of product at Direxion, said by phone. “And hopefully, we’ll buy another company that could have that same potential.”

The Solactive Two Bucks index went live in April, but historical data shows AMC would have entered the gauge about a year ago, when its shares were trading around US$4. The company has surged more than 1,800 per cent in 2021 amid the mania surrounding so-called meme stocks, which enjoy the support of an army of online retail traders.

That crowd is the primary target for the new fund, according to Mazza. While AMC’s presence makes for an unusual start, it’s a reminder that the ETF could well capture future Reddit-fueled rallies.

“This is a very interesting time in the market on multiple levels,” Mazza said. “Some of the newer investors have been accustomed to only having outsized returns.”

LOPX’s other holdings look more in keeping with its goals. Tellurian Inc. and billboard advertising company Clear Channel Outdoors Holdings -- both trading at less than US$4 a share -- are among them. The fund carries a 0.5 per cent fee.